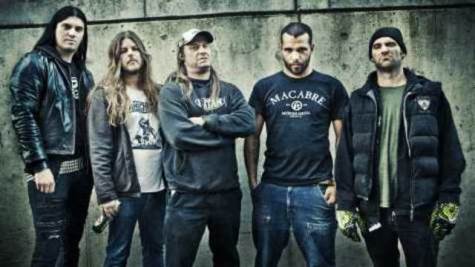 Swedish metal legends ENTOMBED have teamed up with PledgeMusic to launch a reissue campaign for some of their favorite albums. Ran and owned by members of ENTOMBED, Threeman Recordings recently launched a new collaboration with Ninetone Records. The first release under this arrangement was a single for the re-recorded version of the song “Amok” from ENTOMBED’s 2007 album, Serpent Saints – The Ten Amendments, produced by Patrik Frisk (CORRODED).

ENTOMBED updates fans: “We have got together with Pledge Music to reissue three of our albums in special packaging with an additional CD of demo’s B-sides and bonus material. DCLXVI – To Ride Shoot Straight And Speak The Truth, Same Difference and Uprising will be reissued as a 2CD versions including remastered versions of the original albums and bonus discs with unreleased material in a digibook with liner notes, 2LP 180 gr vinyl in gatefold sleeve with liner notes, and digital download. This coloured version is exclusive to the Pledge Music campaign. The digital version will be the music from the 2CD + a digítal booklet.”

ENTOMBED guitarist Alex Hellid comments: “Much of our catalogue has not been available for a long time as we’ve been searching for the best option to re-release these albums for fans worldwide… for years. With Pledge Music we’ve found the ideal partner that helps us to do it our own way, so that the fans can be sure that the reissues are fully controlled by Entombed with full support and co-operation from Threeman Recordings (our own evil empire version of a record company through which we’ve been releasing all our stuff since the To Ride album (our fourth) in 1996 or was it 1997? Wikipedia say 1997 so I guess that’s the truth. Anyway, we want to present these albums in the best possible way, so we’re going to re-master all of them. We may even make an alternative and/or remix of some tracks or album available along the way as well as dig out some demo versions.

Personally I just can’t get enough of that stuff myself when it comes to other peoples music. Just love to hear things in different ways and get a glimpse of the process… absolutely love that. It’s gonna be fun to work on all that and give you updates on how it’s all playing out. Hopefully we’ll be able to bond with whoever’s got questions throughout this campaign which will just make this all even more interesting and help us relive and revel in this flesh! Been waiting a really long time to do this and I am very very excited to finally be here!”