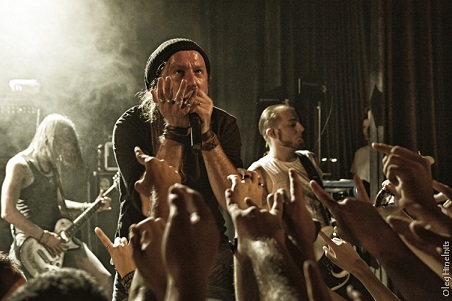 On March 7, Swiss folk metallers ELUVEITIE were awarded one of Switzerland’s most prestigious recognitions in music: a Swiss Music Award in the category “Best Live Act National.” ELUVEITIE was chosen to receive the honor after a highly competitive fan voting, marking the very first time ever for a metal band to receive this award.

ELUVEITIE has now returned to the New Sound Studio to begin work on the follow-up to 2012’s Helvetios, once again with producer Tommy Vetterli (CORONER) at the helm.

Says the band: “As always, working with Tommy Vetterli is as efficient as it is creative: both drum and guitar tracking is already completed! We have now begun work on the folk instruments and vocals at New Sound Studio, Lucerne’s Soundfarm Studio, and Chrigel’s [Glanzmann, vocals] home simultaneously.

“We are extremely proud of the new material and can’t wait to present yet another big step in the evolution of ELUVEITIE later this year! We were also able to secure a bunch of exciting guest performers, the first of which we have recorded last week: the wonderful Christine Lauterburg.

“Not only is Christine one of the most original musicians in Switzerland, but she’s really a living legend! Like no other, she has practiced and perfected the age-old tradition of Swiss jodel over many decades. She has set many milestones in the history of Swiss folk music, and delivered valuable contributions to the research and preservation of a tradition that may reach back all the way to the early ages, and originated with the Helvetian celts.

“We are proud to have Christine in our ranks. Her singing adds just that much more archaic authenticity to our sound, and contributes to the primeval rawness that will define our new album!”