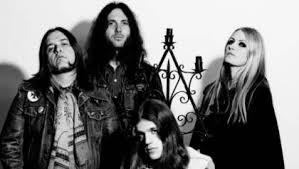 British doomsters ELECTRIC WIZARD have released visual piece for “SadioWitch”, a song from Time To Die. According to vocalist/guitarist Jus Oborn, the footage – captured in various locations, including Iceland – features “Clandestinely filmed scenes of Luciferian depravity” of the kind “long-awaited by the diehard cult of Wizard fans… A visual amalgamation of Kenneth Anger’s psychedelic occultism, the monomania of Jess Franco and the unbridled excess of Robert Hartford Davies, documenting fully the pleasures of the flesh, drugs and sadism… as they really happen today…”

Time To Die is the eighth full-length offering from the masters of aural punishment and is testament to the fact that Electric Wizard continue to be the most uncompromisingly heavy, genuinely twisted and evil band in the world. This will be the band’s first album release since signing a worldwide deal with Spinefarm Records.