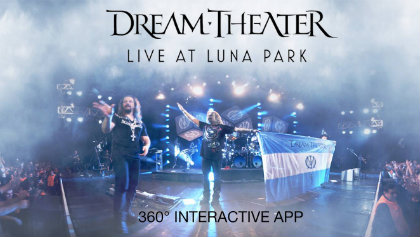 Progressive metal giants DREAM THEATER have announced their first 360° App (iOS). The DreamTheater360° App will offer fans a unique 360° interactive experience into the Grammy-nominated progressive metal titans’ performance as captured onstage by Mativision multi-camera 360° video technology at Luna Park in Buenos Aires. The DreamTheater360° App promises to be a thrilling way for fans to interactively experience the band’s onstage world.

The DreamTheater360° App in its first release will include five interactive songs filmed and produced using the Mativision technology, which virtually transports fans directly onto the Luna Park stage right next to the band members and completely immerses them in a unique experience that they can control in real time. Each fan can direct the show by manipulating Mativision’s multi-camera iOS player, and enjoy the concert in any way they want. They can seamlessly choose to switch from among six different cameras while also being able to rotate camera angles by taping and dragging, or by using the device’s built-in gyroscope. Fans can even zoom in and out or simply switch to “auto pilot” mode and enjoy the show without interaction.

With this groundbreaking app, DREAM THEATER aim to share with fans all the intense moments of a live performance from right beside them on stage, and provide fans with true interactivity to experience the onstage moments with complete freedom.

Along with the unique interactive 360° content, the DreamTheater360° App will also include enriched up-to-date band-related content such as a biography, discography, photos, and continuously updated tour information, news, and social media.

The first release will be just the start: Mativision will constantly surprise fans with frequent updates, adding more and more amazing and exclusive band content.

The DreamTheater360° App is available from the iOS AppStore on January 9, priced at $9.99.