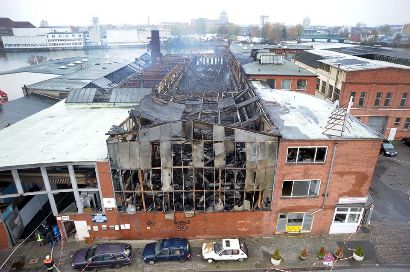 “The recording studio, several practice rooms of Hamburg-based bands and a visual artist studio were completely destroyed. The damages are immense and according to initial estimates more than in a few hundred thousand euros. Together with the Hamburg Cultural Foundation an official donation account for the involved artists, who have lost their rehearsal rooms, studios and full equipment in the fire, has now been established.

For reasons yet unknown, on Monday, November 18th a warehouse complex in Hamburg went up in flames. Affected by the fire including the prestigious Hammer Studios are several rehearsal rooms of local bands such as BROTHERS IN ARMS, A MILLION MILES, CHAIN REACTION, BLACK HAWK, SAMBODROMO, KAMIZARAKY, THE GOLDEN CREEK and CATE’S LEILA.

Valuable musical instruments, all guitar collections, amplifiers, and studio facilities were destroyed in the mass fire. Most of the bands are uninsured or underinsured and now fear for their existence.

In order to help these artists quickly and easily, a consortium of helping hands has now been launched in support of the victims:

The Facebook page Help4HammerStudios now acts as the central point for those who want to help. Within only a few hours more than 4,500 people have already found together who want to support the musicians, whether in kind and cash donations till offering equipment or new rehearsal room facilities. In addition, already more than 50 bands have reported their assurances to support their musician fellows in form of benefit concerts.

With a separate fund-raiser campaign among its members as well as at this year’s Hamburg Music Prize “Hans” on November 27th; also the community of interest Hamburg Music Economy want to help the affected artists and music companies.

The Hamburg Cultural Foundation has just established an official account for donations to support the artists & producers, who have lost everything in the fire: