DEVILMENT To Release “The Great And Secret Show” This Fall 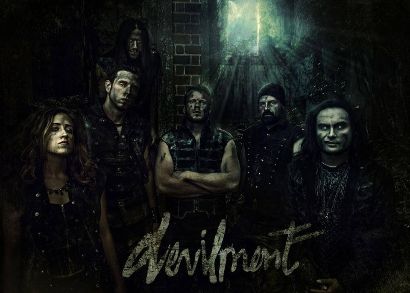 DEVILMENT, the East Anglian frightfest fronted by Dani Filth, are poised to pen a deal for the release of their debut album, The Great And Secret Show.

Recorded at Grindstone studios by producer Scott Atkins (BEHEMOTH, CRADLE OF FILTH, AMON AMARTH) and featuring ten tracks of dark, psychotic groove and brutality, the album, which is ninety percent near-completion, opens another whole can of metal worms for Filth.

“This record possesses a very dark, creepy carnival vibe at its essence, but the majority of the time is it bludgeoning-ly heavy and very twisted, melodically. The six of us have worked very hard to write a collection of songs that does the album title justice, all swathed in a very unique and fatal horror eargasm.”

Destined for an autumnal release, the album’s artwork -which is also ninety per cent completed already- has been beautifully rent by graphic artist extraordinaire, Drake Mefestta.