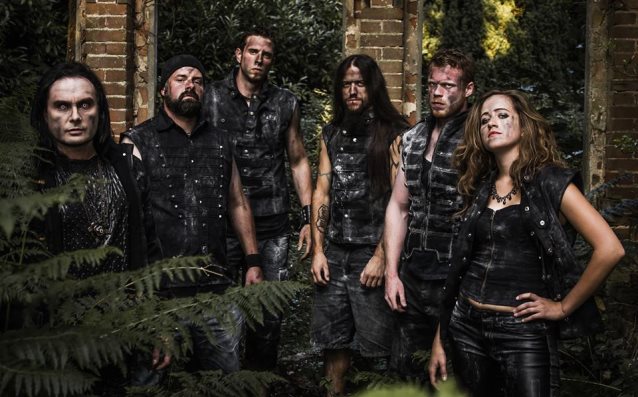 Comments DEVILMENT: “The work reconvenes in a few weeks time after the drum editing is done and this gives both Daniel [Finch, guitar and keyboards] and Colin [Parks, guitar] time to work together on the improvements made working in the studio for a week of sweltering summer country weather.

“Special guests have been alerted to the time frame and the artwork for the album is already well underway, courtesy of resident (evil) artist Jamie Huntley.”

Originally formed by Finch back in late 2011 amidst a bout of religious delirium, DEVILMENT consisted of Simon Dawson (STEVE HARRIS, ex-DEARLY BEHEADED) on drums, Justin Walker (13 CANDLES) on bass and Kieron De-Courci (ex-THE VOICE) on keyboards, with the band experiencing a myriad of problems holding down a stable vocalist.

Enter Daniel’s friend Dani Filth, who, “although not entirely stable mentally,” agreed to help out on a couple of tracks, which then turned swiftly into a studio demo, completed after Dani finished work on CRADLE’s “The Manticore And Other Horrors” album last summer. The demo, known as “Grotescapology”, featured eight tracks, which, although psychotically competent, were used solely as a backbone for a new line-up when Simon Dawson suddenly departed to record and tour the Steve Harris BRITISH LION album, and the remaining two members agreed that work and distance were conspiring to keep them from dedicating enough time to the band. Fortunately, at this point, destiny sat on a posturing horse, was proud to usher Nick Johnson (bass), Dan Jackson (guitar) and Aaron Boast (percussion) into the fray, three extremely competent musicians who suddenly grew out of the local music scene, and soon the band was at full steam once more and starting to write as a combined unit.

Thus October 2012 to the present day has proved to be a very productive time for the band, with a further five songs written towards a debut album, as well as the refinement of older material that a new, gelatinous lineup has dictated (plus a fistful of cool covers to boot…).