While the solid foundation of original members AJ Magaña, Derek Boyer and Torrey Moores oversee the composition of DEPRECATED’s material, the addition of Terrence Hobbs and Matt Sotelo has made them a more cohesive unit.

Deriding His Creation, the band’s 1998 EP, has been rerecorded and will be re-released on October 1st. The band tapped engineer Zack Ohren (SUICIDE SILENCE, SEVERED SAVIOR, DECREPIT BIRTH, SUFFOCATION, IMMOLATION) of Castle Ultimate studios to produce it. 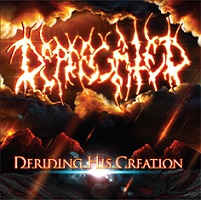