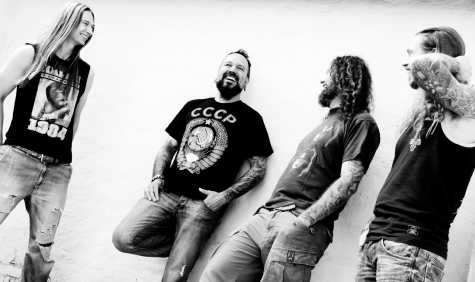 Swedish metallers DEATHDESTRUCTION recorded their sophomore album, tentatively titled “Death Is The Winner”, between November 17, 2012 and January 10 2013 at Bohus Sound studios in Kungälv, Sweden with producerRoberto Laghi (IN FLAMES, HARDCORE SUPERSTAR, LOK, SONIC SYNDICATE). Laghi also mixed the CD, whose sound is described by the new DEATHDESTRUCTION singer Tony Jelencovich as “much wider than [that of] the debut album; it’s harder, more mature and has more melancholy.”

The seventh in a series of webisodes featuring behind-the-scenes footage from the making of the new DEATHDESTRUCTION album can be seen below.

The following songs were laid down during the “Death Is The Winner”sessions:

* Set The Sail
* Divine Justice
* False Flag
* I Am The Plague
* Moscow Morning
* Dead Pilot
* Taste The Mud
* Insane Stays Sane
* Towards The Light
* I Promised You Nothing
* Dead Tomorrow
* Money, Blood, Crucifixus
* A Shelter From Harm
* Give It A Try

Vocalist Jimmie Strimell quit DEATHDESTRUCTION in June 2012 in order to focus on his other band, DEAD BY APRIL.

Regarding Tony‘s addditon to DEATHDESTRUCTION, the other members of the group said, “Tony is a friend to the band, and he has truly made a mark in the Gothenburg scene with bands like B-THONG, TRANSPORT LEAGUEand MASSIVE AUDIO NERVE. He’s also worked with bands like MNEMIC and the Russian band ICON IN ME.

“Tony has everything we look for in a lead singer and a frontman, so the choice was just so easy when we had to find ourselves a new singer. We’re totally stoked about what he will contribute to DEATHDESTRUCTION! This is going to be so fucking good, people!!”

DEATHDESTRUCTION in 2011 inked a deal with the Swedish branch of Sony Music Entertainment. The band’s three-song EP, “Fuck Yeah”, was released in April 2011 and was followed by the group’s self-titled debut album in August 2011. The CD was recorded at IN FLAMES‘ IF Studios withLaghi.