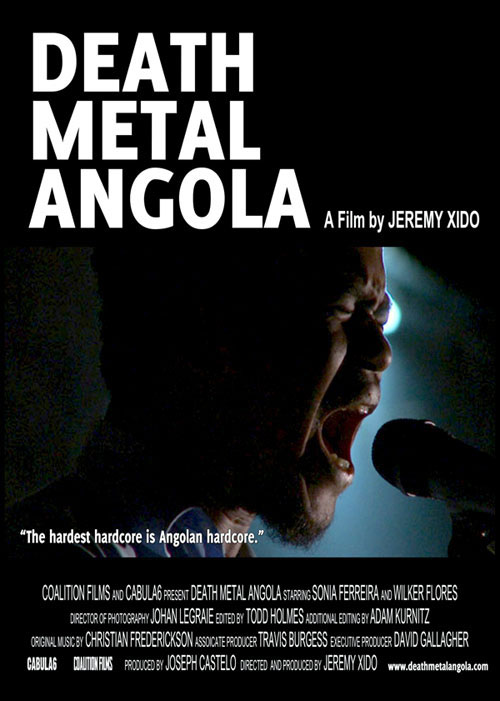 According to Blabbermouth, the award-winning documentary “Death Metal Angola” has just opened at the DOC NYC film festival, which runs November 14-21 at IFC Center and SVA Theater in New York.

Following nearly 40 years of unrelenting war — with every attendant horror — peace and reconstruction are slowly arriving to Angola. Damaged first by the war for independence from Portugal, Angola was then ripped apart by a devastating civil war that orphaned thousands of children. Huambo, Angola’s second largest city, finds 55 of these children in the Okutiuka orphanage under the care of Sonia Ferreira. Sonia’s boyfriend, Wilker Flores, is a death metal guitarist who uses the brutal sounds and rhythms of this hardcore music as a path to healing, or, as Sonia says, “to clear out the debris from all these years of war.”

“Death Metal Angola” tracks Wilker and Sonia’s dream — to stage Angola’s first-ever national rock concert, bringing together members from different strands of the Angolan hardcore scene from different provinces — as it unfolds in fits and starts against the bombed out and mined backdrop of the formerly stately Huambo. Rubble and deconstructed spaces provide scenic reminders of why hardcore music has gained a foothold.

What initially looks like a Quixotic undertaking gains momentum, aided by social media and propelled by members of the various branches of the death metal hardcore underground, who join together to stage the event. Raucous and righteous, “Death Metal Angola”‘s look at a rock show off the grid is fulfilling, haunting, and real.

Director’s note: “A few years ago, I was traveling through Angola researching a ﬁlm about a railway when I stopped at the only cafe that served a decent cup of coffee in the bombed-out former capital, Huambo. A young man in a blue button-down oxford shirt and tiny dread locks waved me over. I sat with him for a while and chatted. We talked about what I was doing there and I asked him about himself. He said he was a musician. Oh, really? I asked, ‘What do you play?’ He looked me right in the eye and said, ‘Death metal.’ Stunned, I asked him if he would play for me. He got very excited, said he’d ﬁnd an ampliﬁer somewhere and that I should meet him later that night at ‘the Orphanage,’ and slipped me the address. I assumed it was some sort of club. However, when I arrived in the middle of the night at what seemed like an abandoned milk factory in the middle of nowhere, it was clear that this was no club. There he was, Wilker Flores, the young man in a blue oxford, with tiny dreads and an electric guitar, surrounded by 55 orphaned boys who called this place home.

“Syphoning electricity from the neighbor, Wilker proceeded to play one of the hardest and harshest impromptu concerts imaginable, lit by nothing more than the headlights of van. It was absolutely magical and terrifying and it marked the beginning of my long and profound relationship with Wilker, as well as the woman who runs the Orphanage, Sonia Ferreira, who is one of the most remarkable people I have met in my life. I have never seen anything like this place and never met anyone like these people. This has truly been one of the deepest, life-altering experiences I’ve ever had. The tremendous power, bravery and grace that these people embody lies at the very heart of this ﬁlm.”