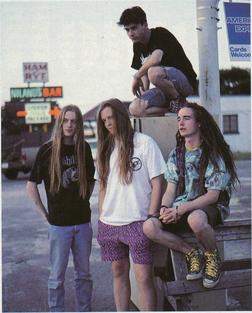 In celebration of the first Carcass album in 17 years, Surgical Steel, we are counting down the band’s best five songs. Granted, there are more than five awesome Carcass songs, but this seems like an appropriate number, eh? As with anything, this countdown is based solely on opinion, derived from years of listening experience. If you disagree with our choices, then voice your displeasure below!

Considered to be the first real showcase for then-new guitarist Michael Amott (later of Arch Enemy), “Corporal Jigsore Quandary” has instant impact based on the song’s opening riff, a real grinder, but a total earworm. From there, the song chunks itself up, and reaps the benefit of Walker/Steer vocal trade-offs, as well as some high-flying solos, ones that fracture the largely death-and-tumble feel of a number that will probably never lose its appeal.