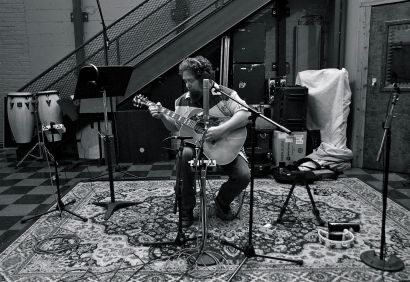 Unless you’ve been in a rock n’ roll coma for the past 20 years, you’ve heard the story of Dave Mustaine being fired from superstar band METALLICA.

ROBERT ROLFE FEDDERSEN, formerly the frontman of well-known mid-‘90s band LOUDMOUTH, has written a song all about this subject, appropriately titled “Dave’s Lament.” The song, which is a cut from Feddersen’s recently released album American Loser (recorded by Steve Albini), was released nationally on February 25th. This is the first song ever written about this widely known rock n’ roll story.

Feddersen and Mustaine became friendly while Loudmouth opened for MEGADETH in the mid-‘90s… so Feddersen has an inside view of Mustaine’s attitude about his successes vs. those of his former band’s.

According to Feddersen, “’Dave’s Lament’ is a folk rock song about MEGADETH and METALLICA. In the late ‘90s, Lars Ulrich had a record label that wanted to sign my band, LOUDMOUTH. I got to spend some time with him going to METALLICA shows and actually got to play onstage with them in St.Louis. They played one of my songs called ‘Not Free,’ which was mind-blowing. A few years later, I found myself on tour with MEGADETH. Dave Mustaine and I hit it off almost immediately. Getting to know Dave, I became aware of just how hard his life had been and how much getting kicked out of METALLICA affected and afflicted him.”

The song is written from Mustaine’s perspective. “I’m a good writer/I play great guitar/But I can’t get over how farther they’ve gone/I’m staying sober/And trying real hard/But I can’t jump over this fence in my yard”.

“This is probably one of the biggest stories in heavy metal that has not been written about yet in song,” Feddersen concludes. “It’s my interpretation of how it all might have felt to Dave.”