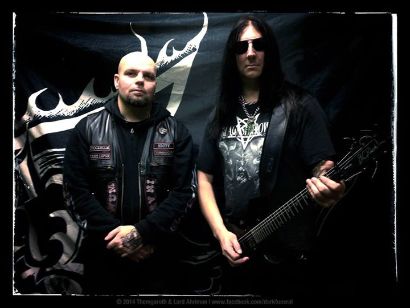 Swedish black metal masters DARK FUNERAL are currently rehearsing heavily for their upcoming anniversary show at Stockholm’s Klubben on May 3rd. This show will also mark the first gig with Themgoroth as guest vocalist since almost two decades.

Lord Ahriman states: “It’s really special for me to have so many guests from our darkest past joining forces again and the last time Themgoroth and I shared the same stage was back in the mid-90’s when we played Germany’s first Under The Black Sun Festival. Now, almost exactly 20 years after the release of our first MCD via Hellspawn Records, the label Blackmoon (RIP) and I originally formed together, it feels truly special to perform with all these guys again even though David will surely be missed on that occasion. Still, we’ll make sure this will be a show you will remember!”

“Even though we haven’t had contact over the years, I have always been impressed by DARK FUNERAL’s ambition and determination. Through their hard work, they have managed to become one of the most respected names in the genre. And I am proud that I have once been a part of it. So, when Ahriman called and asked me if I wanted to sing on this unique event, I had no doubts whatsoever. This will be the perfect opportunity to show my appreciation to the fans and say my final goodbye to the scene.”

On May 3rd, DARK FUNERAL will present an unforgettable gig offering a very exclusive set spanning their entire catalogue yet with focus on older classics. The band will be fronted by Emperor Magus Caligula. On top of this, former members will make exclusive guest appearances, too. Thus you will see Themgoroth, Typhos, B-Force, Dominion and Gaahnfaust live and onstage for the first time since they left the band.