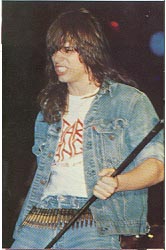 “Our dearest fans, “It is with sadness that I see the events of the last days… and I cannot believe how far things have gone. “When I headed out to start a reunion, I would have never dreamed things would have gone this far. “I am saddened that you, our dearest fans, had to see this whole mess, and for my part, I apologize.

“There were many reasons why I left [DARK ANGEL] after ‘Darkness Descends’ — family but also drugs. I had lost my way and did what I thought was best for me and my family. Perhaps that was selfish of me. “There had been at that time and afterwards other things going on in [DARK ANGEL], and should I be a lesser man, I would go and open that old can of worms. But it has been a long time, and some things should stay private for the sake of everyone involved. There is right and wrong on all sides, and that is all I shall say about this.

“I had hoped that the old grudges would have laid long enough for us as a band to be able to get over them and remember the good times of our friendship and give our fans the reunion they had asked for. Sadly, I was wrong, and I will take this opportunity to apologize to our fans for my mistake. I thought we could all be friends again and I opened my arms to all of my old friends without excluding anybody. Sadly, the things that were said to my face were not the things that had been said behind my back, and this lead to the current mess. “I will not allow this to continue and stain our legacy any longer. The rest of the band have shown what they wanted, and I will obey their decision.

“If there is no room for Don Doty in DARK ANGEL, I will find my place somewhere else. I did not imagine my return to music to happen outside of DARK ANGEL, but life is full of surprises.

“I will not give up. “I wish my fellow members of [DARK ANGEL] all the best with a reunion that will hopefully go better than the one in 2002.”

DARK ANGEL’s management issued a statement yesterday accusing Don Doty of displaying a “lack of responsibility” by posting “false information” and starting “unfounded rumors” that have been “creating confusion” among the group’s fans. The management confirmed that DARK ANGEL will reform for a limited number of appearances in 2014 with a lineup that will feature Gene Hoglan (drums), Jim Durkin (guitar), Ron Rinehart (vocals) and Michael Gonzalez (bass).
Guitarist Eric Meyer is also expected to be involved.