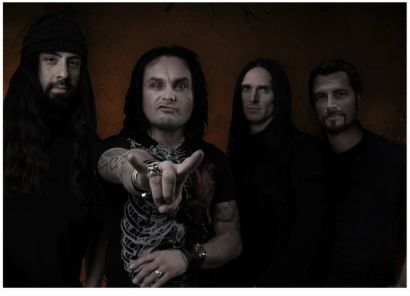 Says Filth: Just a quick note to let you guys know that everything went well in Bergen, Norway finishing up work on songs for the Temple Of The Black Moon album with Tom Cato Visnes and Arve Isdal over the course of last week, with a little direction from Rob Caggiano who is busy touring with his new band VOLBEAT.

“Mainly we’d been working on fine-tuning a few songs ready for the drum session with John Tempesta in LA come mid-July, and they should now sound much better than they already did. Which is saying something. Next step is for me to go into Springvale studios in Ipswich and re-sing some of the parts we’ve improved upon, in order that the tracks are the best they can possibly be, to beat other music up to.

“The weather was pretty shitty FIX to begin with when I arrived last Thursday, but it soon was all beautiful sunshine dancing off the leafy mountains and very picturesque, and aside from the home studio work, we managed to meet up with some good friends, which was also a bonus. Plus, amidst visiting the Garage Pub wherein 90 percent of patrons are metal musicians and watching Tom’s son Trym perform in a boy band troupe in his ‘end of term’ school fete, we also found time to visit the Stavkirke (Medieval church) that Varg Vikernes burnt to the ground 21 years ago to the exact day we visited. Weird or what!?!

Anyhoo, more details on the band as they occur fellow Mongoloids. And thanks to Tom (King in another incarnation) for putting me up in at his apartment and apparently putting up with me!!!”

Below is the track ‘Infernal Desire Machine’ (Demo). More on Temple Of The Black Moon at this location.