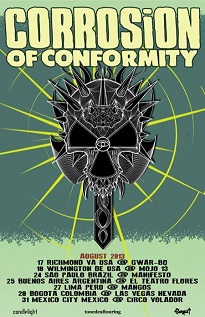 Following their recent performance at the Fifth Annual Scion Fest in Memphis, CORROSION OF CONFORMITY has announced live assaults for August.

In addition to their already planned participation at GWAR’s annual BBQ, the trio will perform a headlining show in Wilmington, Delaware before heading to South America for a string of dates. The August shows mark a break from continued work in the recording studio on the band’s new album, expected for release in early 2014.