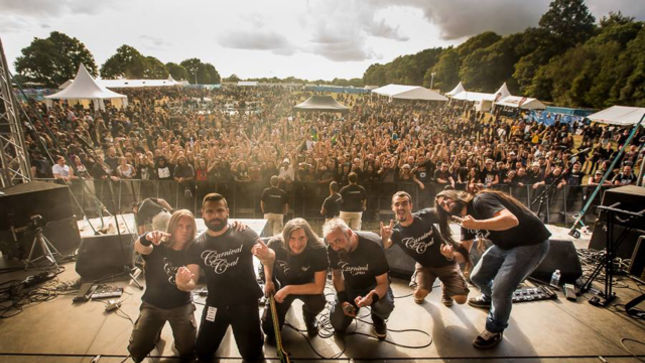 Kaotoxin has announced the inking of a deal with CinC, the live band put together and fronted by ex-Carnival In Coal singer Arno Strobl (We All Die (laughing), 6:33, Arno Strobl) to pay homage to his former act.

CinC, which features past and present members of 6:33, Infected Society, Yyrkoon, John Makay, Mercyless, Orakle, Gorod, Fleshdoll, etc., did a tour throughout 2014 to celebrate the 15th anniversary of Carnival In Coal’s debut full-length, Vivalavida, playing the album in its entirety. The tour brought the band to two great festivals, Czech Republic’s Brutal Assault and France’s Motocultor Fest, and many French cities, among which the place where it all begun so many years ago, France’s Amiens where they recorded the full set with no less than seven cameras.

The resulting DVD, titled VivaLIVEvida (a tribute to the music of Carnival in Coal), will be released in advance (retail release date yet to be set) for the band’s farewell gig which will take place at Kaotoxin’s second annual festival, the KaotoxinFest#II, on December 5th in Lille, France.