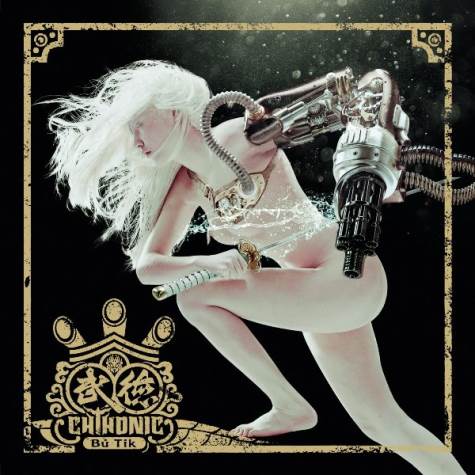 The Oink Chen-designed cover artwork for “Bú-Tik”, the new album from Taiwanese extreme metallers CHTHONIC, can be seen below.

As the new CD from CHTHONIC underwent mixing at Sweet Spot studio in Halmstad, Sweden with producer Rickard Bengtsson (ARCH ENEMY), the work on the CD’s cover also began in Taiwan. After nearly 100 hopeful candidates replied to a casting call, which called for girls who were “at least 160cm tall, skinny, with light skin, and are ok with full-body painting,”CHTHONIC bassist Doris Yeh and the art design team decided on Bu to represent the album’s cover girl.

“It’s certainly not an easy job for ancient Chinese emperors to choose their wives,” said Yeh jokingly after several sleepless nights of deliberation. “I was even looking through the pictures in my dreams!”

With a concept in mind to have an elder, a girl and a child as the cover picture, and visualize the idea of armed body and mind through special makeup and computer graphics, the search began for candidates to represent the theme. Embodiments for the roles of the elder and the child were quickly decided. Hsu Ching-fu, a clergyman from the Gikong Presbyterian Church, and A-Chi, son of a well-known tattooist Ah-J, were picked to represent these figures.

The shooting of the album cover photo was completed in February. The new album, the band’s seventh overall, is slotted to be released in Europe, North America, and Asia in June on Spinefarm/Universal Music.

In the meantime, the band has been hard at work promoting its new mobile app game, the first of its kind to use exclusively heavy metal music,“Chthonic – Rhythm Crusher”.

Last month, following two Japan performances, CHTHONIC joined fans in Tokyo at Rockaholic for a live battle of the game. Fans from all around the world were invited to join the festivities via the game’s online “Vs. Mode,” with the winning fan in attendance taking home a brand new iPad Mini. CHTHONIC fan Satoshi Mukaide took home the grand prize, despite losing the final match to CHTHONIC vocalist Freddy Lim.

Said Lim, “When I’m playing ‘Rhythm Crusher’, I can feel the energy from the music even more! I think that’s why I’m so addicted to it.”

CHTHONIC continues to battle online against fans every day. The bandmembers can be identified by their personal screen names: FreddyLimTT, dorisyeh0919 and Jessefilth, so be sure to keep an eye out for the chance to battle the current “Chthonic – Rhythm Crusher” world champion, vocalist Freddy Lim!