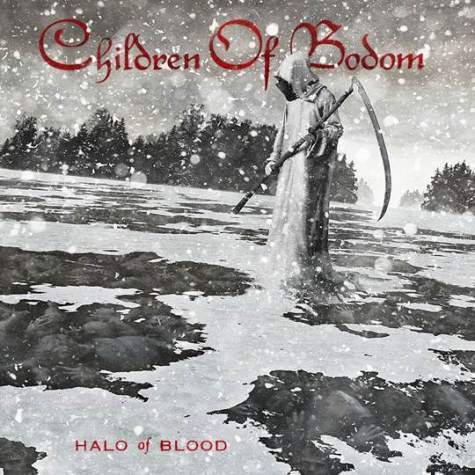 The second trailer for “Halo Of Blood”, the eighth studio album from Finnish metallers CHILDREN OF BODOM, can be seen below.

“Halo Of Blood” will be released on June 11 in North America via Nuclear Blast Records. The cover art was created by Sami Saramäki, who was responsible for the artwork on previous CHILDREN OF BODOM albums “Follow The Reaper”, “Are You Dead Yet?” and “Hate Crew Deathroll”.

CHILDREN OF BODOM’s new CD was recorded at Danger Johnny Studios in Helsinki. For the recording of the LP, CHILDREN OF BODOM has teamed up with recording engineer Mikko Karmila, who worked with the band on their fan-favorite albums “Hatebreeder”, “Follow The Reaper” and “Hate Crew Deathroll”, as well as Swedish producer Peter Tägtgren (MARDUK, AMON AMARTH), who oversaw production of both vocals and keyboards on the record. The album was mixed at Finnvox Studios in Helsinki.

Commented CHILDREN OF BODOM guitarist/vocalist Alexi Laiho: “‘Halo Of Blood’ is the eighth studio album from CHILDREN OF BODOM, and believe it or not, but we still managed to keep it fresh and new while still maintaining the elements that make COB sound recognizable. It’s got the fastest and the slowest song we ever made and lyrics wise there are themes we had never had before. It’s 10 new songs of pure Nordic metal and whether you enjoy it with a beer or a glass of water, I’m sure you will have a good time.”

Added CHILDREN OF BODOM bass player Henkka Seppälä about the artwork: “We wanted to have a winter scene. Somehow it fits well with the atmosphere of the music and the composing session. It could be Lake Bodom, actually, frozen, with people trapped under the ice. Very Finnish looking scene. We were really happy how Sami created the whole imagery!”

“Halo Of Blood” is expected to feature a guest appearance by ANNIHILATOR mainman Jeff Waters.

“I played on ANNIHILATOR’s album ‘Metal’ in 2007, so the way I see it, Jeff Waters owes BODOM a solo or two! It’s payback time,” Laiho told Soundi magazine.