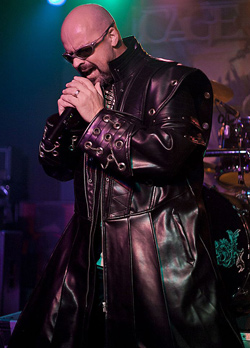 San Diego power metallers CAGE have made some changes to their lineup and will return to the stage from an 18-month hiatus. This long-running heavy metal band of 21 years re-emerges with original members Sean Peck and Dave Garcia and three new additions.
First is Sean Elg, drummer from Southern California thrashers NIHILIST. “This guy doesn’t stop! He is a machine!” says Dave Garcia. “He has played literally thousands of shows and just loves metal. We dig that about him.”

Next up is Dwight Magic, bass player from the band DETONATED. “He plays a six-string fretless bass and has committed his soul to that instrument and the art of metal itself, I tell you! He is by far the most skilled guy we have ever had at the position and is a great writer too,” says Peck.

Last but not least is new guitarist Casey “The Sentinel” Trask, formerly of the San Diego band MONUMENT.

“At just 22 years old, it is crazy that he has such an old-school love for the kind of metal that makes CAGE go,” says Dave. “The first jam, we had I knew he was the guy. He has a great feel and just goes wild at practice. He pulls killer riffs out of thin air and is fun as shit to hang out with.

“We gave him the nickname The Sentinel, based on some comic nerd stuff that everyone who knows the X-Men will get, and it is also my favorite PRIEST song too.”

Citing a busy schedule with their other bands as the reason for the long layoff, CAGE is back and playing several live shows across the U.S. Peck says: “I have been slammed with the DEATH DEALER release and Dave has been finishing up his solo album called HELLSCREAM with ex-IMAGIKA singer Norman Skinner, which is killer, by the way! But we now have found some time to finish up our seventh record.”

CAGE is currently in the studio working on its next release, which is a horror-concept CD set in London in 1869. Peck states: “It is very much influenced by HP Lovecraft and will ship with a 90-page mini novel telling the story in detail. It is really a massive challenge for us, but so far we love it! During all this, we also knew we had to get out and play some shows with the new guys. These dudes are a young and hungry bunch of thrashers!” 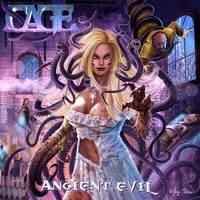