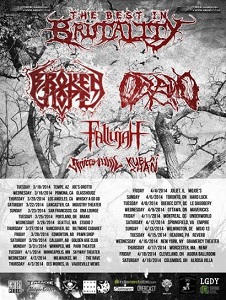 BROKEN HOPE has announced their first major North American tour of 2014. The Best In Brutality tour, co-headlined by Broken Hope and OCEANO, will hit 27 cities in the US and Canada in March and April. The tour will also include a premier stop at the New England Metal and Hardcore Festival on Thursday, April 17th.

The Best In Brutality is a brand new, branded tour that is here to further bring underground death metal and metal to the forefront of today’s heavy metal offerings. In a world where metal fans are loyal to what they love and are always looking for something new, The Best In Brutality tour aims to bridge the gap each year with artists that indulge new and old fans of underground metal music.

The first installment of The Best In Brutality tour features Broken Hope and OCEANO co-headlining together, with support from FALLUJAH, RIVERS OF NIHIL, KUBLAI KHAN to round out this heavyweight lineup and tour.

Jeremy Wagner of BROKEN HOPE states, “2014 keeps getting better! We’ve been supporting Omen Of Disease nonstop since its release last October, and now we’re keeping the monster alive as we participate in the The Best In Brutality tour! Broken Hope are thrilled to be back on another run of North America! This time we’re teaming up with new and brutal blood with a lethal package that includes Oceano, Fallujah, Rivers Of Nihil, and Kublai Khan! This group of bands is a traveling death machine – we’re all going to obliterate the US and Canada with these concerts! Broken Hope can’t wait to give you all our best shows yet!”

Adam Warren of OCEANO adds, “We are very honored to be a part of the The Best In Brutality tour. We are equally excited to share our brand of heavy metal with the broad fan base this tour will surely bring, ending in a unique multi-metal experience for all. Bring on the circle pits!”