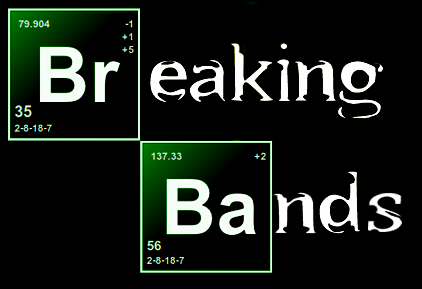 Breaking Bands LLC may be a new name on the management block, but is made up of renowned industry veterans — making the experience anything but new.

Founded by the powerhouse team of Adrenaline PR CEO Maria Ferrero, former Megaforce Records and Crazed Management owners Jon and Marsha Zazula, and TESTAMENT vocalist and co-manager Chuck Billy — Breaking Bands LLC’s mission is to bring some new, unknown bands to the forefront, as well as develop and guide the continuing careers of some of today’s most well-established artists. Combined, Chuck, Maria, Jon, and Marsha bring decades of experience to the table, from their individual beginnings at the very introduction of the heavy metal genre in the 1980s.

To truly understand the prowess of Breaking Bad LLC, one needs to know the eminent status of the parties involved.

Chuck Billy is best known as the accomplished lead singer of legendary Billboard-charting thrash metal band TESTAMENT, one of the five original thrash metal bands to exist in the world. TESTAMENT has sold millions of albums worldwide, and boast a total of eleven studio albums, four live albums, five compilation albums, and six singles altogether. Their most recent album, Dark Roots Of Earth, reached No. 12 on The Billboard 200 chart. In 2010, Chuck Billy was recognized in the Smithsonian National Museum of the American Indian exhibit “Up Where We Belong: Native Musicians In Popular Culture”, which was on display through January 2, 2011.

“After being friends and doing business for almost 30 years, we all decided that it was time to create a team that has lived and breathed the music business with all its ups and downs,” says Chuck Billy. “I feel that with all the knowledge that we’ve gained, it would be nice to work with bands and help improve and guide them in the right direction to a long and successful career. I feel this is a natural progression in my life along with focusing on my band TESTAMENT for 28+ years.”

Maria Ferrero began at Megaforce Records and Crazed Management in 1982 as the label’s first publicist and A&R representative, eventually working at labels TVT, E-magine Entertainment, and Metropolis Records, before founding her own successful boutique PR, branding, and marketing firm, Adrenaline PR. Maria Ferrero and her publicity team have represented an array of projects such as the Rockstar Energy Drink Mayhem Festival, MOTÖRHEAD, ANTHRAX, LAMB OF GOD, FIVE FINGER DEATH PUNCH, TESTAMENT, DETHKLOK, MACHINE HEAD, MISS MAY I and many more.

“Making a difference on the projects we are working is what it’s all about for me, personally. I would not want to take on this business venture with anyone else. I trust my partners. We’re proven,” states Maria Ferrero.

Jon and Marsha Zazula founded Megaforce Records in 1982, first signing METALLICA, and then going on to sign ANTHRAX, TESTAMENT, OVERKILL and more of the era’s biggest and best bands. They also founded Crazed Management in 1982 and managed ANTHRAX for the first 11 years of their career, METALLICA for two years, MINISTRY, and TAD, among others.

“Between all of us, there is over 100 years of experience and 30 years of mutual trust and respect,” states Jon Zazula. “It is a great feeling for Marsha and I to work alongside with Chuck and Maria. It feels like the dream team.”