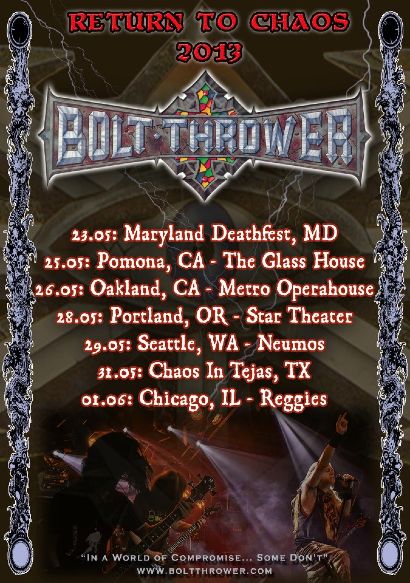 British death metal legends BOLT THROWER are currently out on a string of US dates with fellow countrymen BENEDICTION, dubbed the Return To Chaos tour. Footage of Bolt Thrower performing ‘When Cannons Fade’ on May 26th in Oakland, SF at Metro Opera House has been posted online, courtesy of CapitalChaosTV.

BOLT THROWER has continued its “quality-not-quantity” approach to performing live and that has definitely paid off. In 2010, they played a number of shows and festivals across Europe, and from doing more intimate underground shows (in keeping with their roots), they can also pull off performing to a festival crowd of 30,000 people. That’s why, as they reached and moved beyond their 25th anniversary, BOLT THROWER are still at the top of their game.

Finally, after only a handful of North American dates in the past few years, limited to Maryland Deathfest, BOLT THROWER is currently taking part in the “Return To Chaos” tour. The band is performing seven shows across the U.S. in May. The dates include Maryland Deathfest, Chaos In Tejas, as well as club shows in Pomona, California; Seattle, Washington; Chicago, Illinois and more.

The last three albums from BOLT THROWER — Mercenary (1998), Honour Valour Pride (2001) and Those Once Loyal (2005) — were reissued on vinyl on October 24, 2011 via Metal Blade Records. All three albums were released as gatefold LPs in colored vinyl, limited to 1,000 units each.

BOLT THROWER indefinitely postponed plans to record a new studio album after the band realized that the new stuff it had written “just doesn’t match up” to the group’s last CD, “Those Once Loyal”. “We have a lot of pride in our back catalogue, and we refuse to turn into one of the many bands (like the ones we grew up listening to) who end up releasing crap, and we’re also not prepared to compromise by instead releasing an album of cover versions or a ‘best-of’ album,” BOLT THROWER explained in a statement.