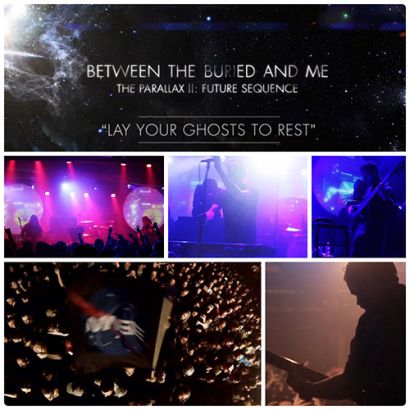 BETWEEN THE BURIED AND ME (BTBAM) have launched a brand new video, which was filmed at the Baltimore Soundstage, The Orange Peel in Asheville, NC, and The Cannery Ballroom in Nashville, TN.

“Lay Your Ghosts To Rest” was produced, filmed, and directed by Raymond McCrea Jones and Wes Richardson. The video is a surreal look at the band’s live show, and the detailed light show and production that accompanies the aural experience that fans have come to know and love.

Between The Buried And Me previously announced that they will be joining MESHUGGAH for their 25th anniversary tour across North America. Now, in addition to those shows, BTBAM will be performing a select few headlining shows on their way out to kick off the Meshuggah tour in Los Angeles, CA. Beginning on May 29th, fans will see BTBAM make their way to the west coast with TRIOSCAPES serving as direct support.