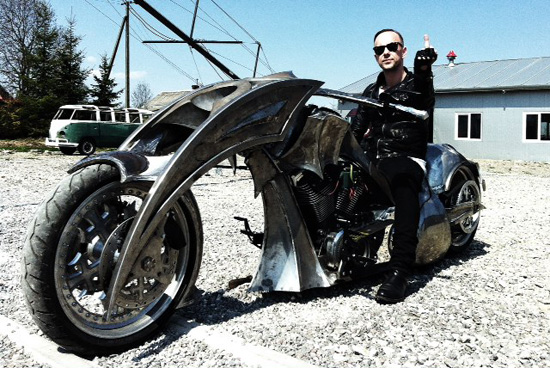 BEHEMOTH have been holed up in Hertz Studios working on their tenth full-length album. As the band continues to record, they have been posting images and what appear to be lyrics for portions of new songs. While BEHEMOTH crafts their new album, Game Over Cycles in Poland has been working on the first ever BEHEMOTH motorcycle. The bike is nearly complete, and photos of the steel piece of art, shot during Nergal’s recent visit to the workshop, have been posted on facebook.com/GameOverCycles.

BEHEMOTH will be embarking on the Rockstar Energy Drink Mayhem Festival this summer (tickets and info on rockstarmayhemfest.com). In addition to the festival dates, two off dates have been announced, including July 9th in Grand Rapids, MI and July 29th in Louisville, KY. Fans at each show will be treated a mini-fest of sorts, with each show including Children of Bodom, Amon Amarth, Job for a Cowboy, Battlecross, and more.

More updates will be posted as they are made available. Fans can stay up to date with the absolute latest at facebook.com/behemoth and twitter.com/behemothband.