BEHEMOTH: English Version Of Nergal’s Autobiography To Be Released In March 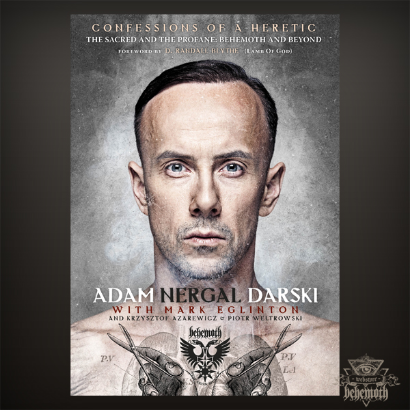 Poland’s BEHEMOTH have checked in with the following update:

“We are proud to announce the English version of Nergal’s book, Confessions Of A Heretic: The Sacred And The Profane – Behemoth And Beyond. The book has its premiere on March 19th and the pre-order launch in our webstore NOW! Only in our store each book will be hand signed by Nergal!! Pre-order here.

The book, originally written in Polish by Adam Nergal Darski, Krzysztof Azarewicz and Piotr Weltrowski, now will be available in English thanks to Mark Eglinton, a bestselling author and ghostwriter. Specialising primarily in memoir and non-fiction, his books include Official Truth: 101 Proof—The Inside Story Of Pantera with bassist Rex Brown, widely acclaimed as one of the most honest music memoirs of recent years.

The book will be issued by Jawbones Press.”

CANNIBAL CORPSE and BEHEMOTH will join forces beginning on January 28th in New Orleans, LA at the House of Blues. To open the show, two of Sweden’s finest metal acts have been enlisted: Aeon and Tribulation.