Finnish supergroup BARREN EARTH have posted the lyric video for “Shapeless Derelict,” which comes from their forthcoming new album, On Lonely Towers, which is due via Century Media Records on March 30th in Europe and March 24th in North America and will be available as Ltd. Digipak Edition, Ltd. 2LP, Standard Jewel Case Edition and as digital download.

Bassist Olli-Pekka Laine comments on the music: “Varying from 90’s death and doom metal to 70’s avant-garde prog rock, “A Shapeless Derelict” represents BARREN EARTH’s roots in their purest form. Let the track’s original title, Kingtopsy, a hybrid between King Crimson and Autopsy, do the talking. Having these ingredients blended and represented in modern, but still traditional standards, “A Shapeless Derelict” simply stands up to its name: Abandoned and deserted at sea – moaning alone, oddly, yet proudly!”

Singer Jón Aldárá describes the story behind the lyrics: “A forsaken girl wanders through both physical and mental landscapes without direction as hallucinations and desperation tear at her mind. This is a metaphor-heavy song about overcoming the fear of being nothing in a world without true meaning and gaining courage to live nonetheless.”

On Lonely Towers was mixed by Petri Majuri and mastered by Tony Lindgren at Fascination Street Studios. The artwork was created by no other than Travis Smith. 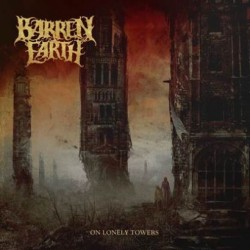