Arjen Lucassen Checks In From THE GENTLE STORM Recording Sessions 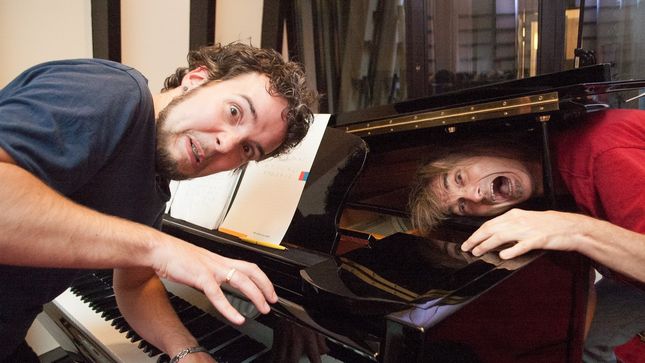 Ayreon mastermind Arjen Lucassen recently announced his next album as a collaboration with vocalist Anneke van Giersbergen (ex-The Gathering) dubbed THE GENTLE STORM, saying it will be “an epic concept double album, a combination of ‘classical meets metal’ and ‘acoustic folk’.” He has posted a new update online along with the photo above:

“We’ve been recording piano for The Gentle Storm with Joost Van Den Broek. Once more this true virtuoso impressed the hell out of me! And yes, we managed to make even more childish pictures than ever… and somehow they are getting more violent too, ha ha! But don’t worry, we still like each other…”

THE GENTLE STORM double album is an epic production of Ayreon proportions, divided into two parts as a full-on metal assault (CD1) and lighter folk arrangements (CD2). It also heralds Anneke’s return to the realms of heavy guitars and soaring vocals reminiscent of The Gathering’s breakthrough album, Mandylion.

The album release will be followed by live dates through the spring and summer European festival season. Known for touring extensively year after year, Anneke will take The Gentle Storm on the road backed by well known Dutch talents. Arjen, however, will not be part of the live production.