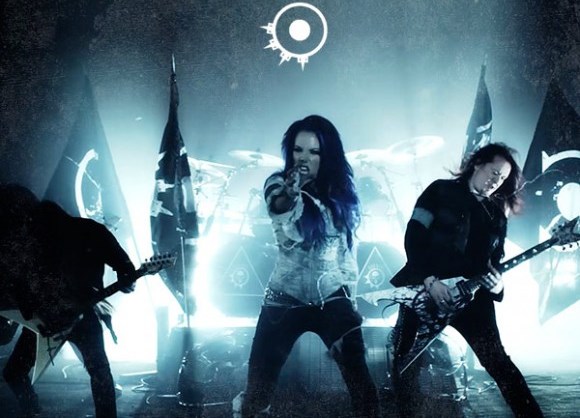 Multi-national melodic death metallers ARCH ENEMY have posted the lyric video for “As the Pages Burn,” a song from their forthcoming new album, War Eternal. The album – due June 10 via Century Media – will be the first to feature new singer Alissa White-Gluz, who replaced long-time vocalist Angela Gossow earlier last month.

Says ARCH ENEMY chief songwriter and guitarist Michael Amott: “‘As The Pages Burn’ almost goes back to the style of writing that I had in the late ’90s. It’s very old-school ARCH ENEMY with an almost SLAYER vibe in the intro/verse and a huge melodic chorus. A bit like ‘The Immortal’ and other ARCH ENEMY classics of that time. The middle section is very classical music-inspired — a twin-guitar part that is a lot fun to play.

“Alissa wrote the lyrics for the song.

“This song is an example of what I love about collaborating — in the songwriting, I’m giving her the instrumental, and she comes from a different background, and the two different approaches merge together to form a very interesting result that blew my mind. It’s one of my favorite tracks on the album.”

Adds Alissa White-Gluz: “‘As The Pages Burn’ is also one of my favorite songs. I think it’s going to be a very fun song to perform live.

“I really like fast-paced, energetic songs. A lot of the lyrics on the album are coming straight from my brain during sleepless nights.

“I often wake up in the middle of the night from horrible nightmares and just start writing songs. For whatever reason, I like the lyrics that I get that way; they feel real and uncensored.

“This song is one that I wrote at 4 a.m. in the dark, half asleep. In the morning I woke up and thought, ‘This is cool, I’m going to use this, and I know just the music to put it to.’ The musical dynamics in the song are very satisfying to sing to as well. I hope you like it!”