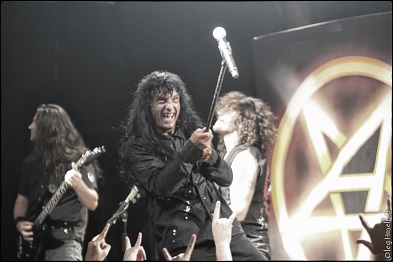 New York thrashers ANTHRAX are now streaming “Soror Irrumator,” a new song culled from Catch the Throne: The Mixtape, for the Emmy and Golden Globe-winning series, Game Of Thrones. Building on the success of Volume 1 – with over 2.5MM streams to date – Volume II will feature Method Man, Snoop Dogg and Yandel and will transcend genres by adding metal bands Killswitch Engage, Mushroomhead and Mastodon to the mixtape lineup The mixtape was released in anticipation of the season 5 debut of Game Of Thrones, airing April 12 on HBO.

Produced by Launch Point Records, the 15-song mixtape features diverse artists representing Game Of Thrones families, leveraging themes and highlights from season 4. Showcasing the importance of music in Game Of Thrones, each song on the mixtape samples music from the show’s season 4 soundtrack. This year’s mixtape also weaves in the overarching theme of fire and ice, providing listeners with an exciting lineup of heavy metal and hip-hop artists.

ANTHRAX is currently in the studio working on the follow-up to 2011’s Worship Music.