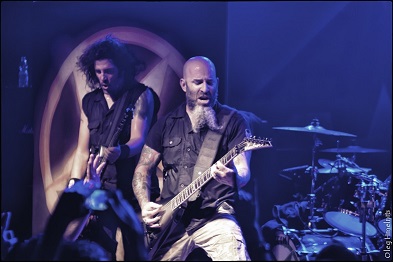 ANTHRAX is putting the finishing touches on the follow up to 2011’s critically acclaimed, Grammy-nominated album Worship Music for a tentative early 2016 release via Megaforce Records.

In this new in-studio clip, bassist Frank Bello talks about ANTHRAX’s writing and recording process, drummer Charlie Benante gets into the pressure that ANTHRAX has felt with this new project and gives his thoughts about why the new album is “the next level” for ANTHRAX, and guitarist Scott Ian explains why the band recorded the 18 new songs in batches.

ANTHRAX will hit the road late summer into fall, playing major U.S. festivals, a series of North American dates with MOTÖRHEAD, including MOTÖRHEAD’s MotörBoat cruise, and then dates in Japan and Europe, many with SLAYER.