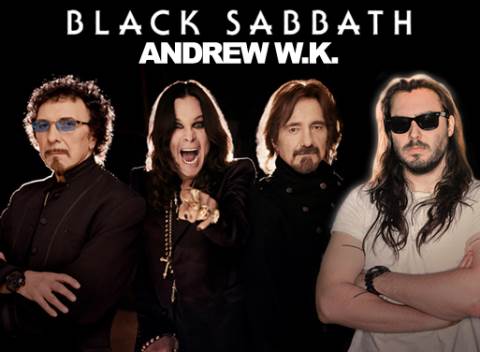 In a bit of odd news, heavy metal legends BLACK SABBATH have personally invited Andrew W.K. to join them for their entire North American tour, asking him to kick off every show as their exclusive opening act. Per their request, the self-proclaimed King Of Partying will perform a special DJ set every night before the definitive heavy metal band takes the stage. Andrew promises to spin a rabble-rousing selection of classic riffs, heavy jams, and crowd pleasing favorites spanning every era of hard rock and metal.

As the anticipation builds for SABBATH’s show, fans can count on Andrew to crank up the excitement even higher with his signature style and party energy. He’s been asked to prime the atmosphere before the metal masters take the stage, and he will do everything he can to deliver the goods.

Speaking on being chosen for such a prestigious bill, W.K. said: “I’m just shocked. It’s just the most incredible dream come true! This is the greatest honor I could be given.

“I remember when the phone rang and I first heard that BLACK SABBATH wanted me to be their exclusive opening act. I was really in a state of disbelief — almost sick with amazement and excitement. It took about 3 days until I fully mastered the reality of this opportunity and realized it was really going to happen.

“BLACK SABBATH’s music changed my life from the first time I heard it, and this tour will change my life all over again. I couldn’t be more thankful or humbled by this one-in-a-billion miracle.

“Can this really be real!? What kind of adventure will this be!?”