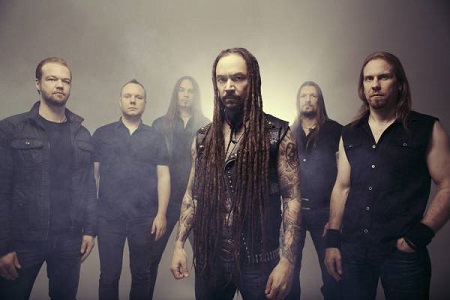 Finnish melancholic dark metal kings AMORPHIS will perform a special concert at the Olavinlinna Castle, a stone fortress built in 1475, on July 13, 2014 during the Savonlinna Opera Festival’s 2014 season in Savonlinna, Finland.

The idea of inviting AMORPHIS along to Savonlinna was, according to the festival’s artistic director Jorma Silvasti, born out of the opera called “Kullervo” by Finnish composer Aulis Sallinen. “I asked myself what other front-line Finnish music views the male soulscape through the eyes of ‘The Kalevala’ [19th-century work of epic poetry],” Silvasti said. “I wanted something to offer an audience that may never before have visited Savonlinna during the Opera Festival.”

The program for the AMORPHIS concert will include material from the band’s most recent album, Circle, as well as tracks from the Eclipse CD retelling the story of Kullervo. The lyrics, which were based on texts by Paavo Haavikko with translations by Anselm Hollo, helped propel AMORPHIS to the ranks of the Finnish metal elite.

AMORPHIS’ albums draw on the Finnish national epic “The Kalevala”, and the ancient folk poetry of “The Kanteletar” have influenced the band’s signature sound and won the group fans all around the world. AMORPHIS could, in fact, be called the heavy ambassador for Finnish mythology.