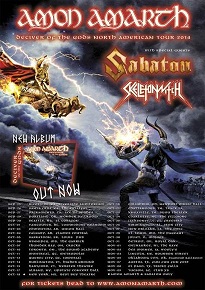 SABATON have announced that they will join Viking metal band AMON AMARTH on their headline tour this fall. The tour kicks off on September 25th in Riverside, CA and visits a total of 35 North American cities before coming to an end on November 9th in Tucson, AZ.

Skeletonwitch will open each show, except in New York where fans will be treated to the first ever, and exclusive North American performance by extreme metal supergroup Vallenfyre. Tickets will go on sale on May 30th.