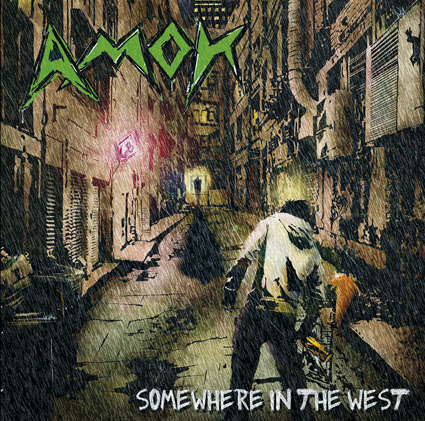 Recorded between the months of February and July of 2013 at AMOK HQ, Hamilton, Scotland. The album was produced, engineered and mastered on location at Grindhouse Recordings, Hesperia, CA, USA. Somewhere In The West is an evolution of Amok’s already distinctively heavy, yet very accessible sound: the album fuses together technicality, speed, aggression, power and melody to produce a fresh outlook on modern thrash metal. Telling stories through lyrics of poverty, corruption, addiction, lawlessness and the general deterioration of the civilized human world, Somewhere In The West promises to wipe out any pre-conceived notions of what a Thrash Metal album is.

Somewhere in the West track listing:

“Somewhere in the West” video: