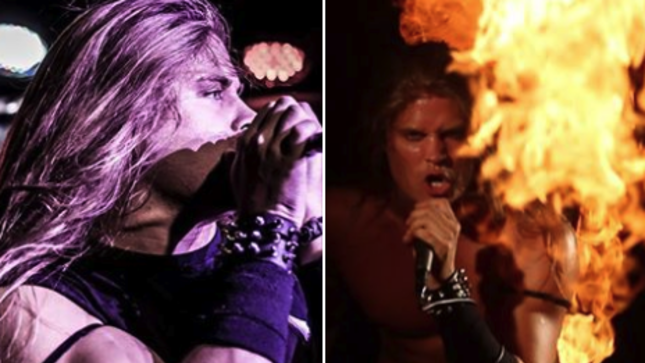 Swedish pop-metallers AMARANTHE have checked in with the following update:

“Good news and some bad ones! Our Sgt. of Screams Henrik Englund will become a father in the next month – congrats Henrik!! However, this will take place during the USA/Canada tour, and therefore Henrik will unfortunately not be joining us on this run. Though, he will be back in full force right after the tour! So, we have the great pleasure to introduce to you his temporary replacement, from Swedish death metal kings Deals Death, Olle Ekman! Olle is a great friend of the band, and has toured with us last year with his own band. He knows Henrik’s style and will add his own flavour to the mix! See you all soon!”

AMARANTHE will make their triumphant return to North America this spring for a headline tour. This marks the first time the band has cruised through the US and Canada since last fall, when they served as main support for Within Temptation. With four stops in Canada, including Toronto, Calgary, Edmonton and Vancouver (listed below), fans will enjoy the full Amaranthe experience.

Since the October 2014 release of Massive Addictive, which debuted at #1 on Billboard’s Heatseekers Chart, AMARANTHE have gained steady momentum, with the addictively catchy single “Drop Dead Cynical” enjoying an exciting wave of success, garnering major spins at SiriusXM’s Octane and currently climbing the Active Rock radio charts. The band recently shot a video for “Digital World”, which will premiere shortly. Stay tuned!

Joining AMARANTHE on this spring trek will be their labelmates, Santa Cruz, a bunch of young Finnish Turks with major chops. They dropped their self-titled album on March 10th and are arriving stateside just in time to make some rock ‘n’ roll noise, to make dedicated and diehard fans of your sons, and to make out with your daughters. Also on board for the trek is I Prevail.