ALCEST And ANATHEMA Team Up For Fall North American Tour 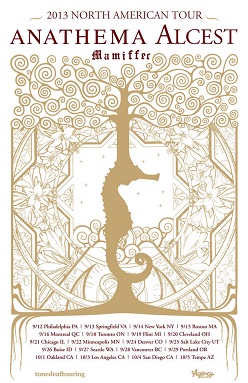 This September and October, PROPHECY PRODUCTIONS artists ALCEST will take a break from work on their upcoming fourth album to embark on a co-headlining tour across the United States and Canada with masters of atmospheric rock ANATHEMA.

Founding ALCEST visionary Neige had the following to say about the upcoming tour: “We feel honored to tour with ANATHEMA and [openers] MAMIFFER. For years, ANATHEMA have been making this unique mix of prog and emotional rock. MAMIFFER is the post-rock/experimental band of Faith Coloccia and Aaron Turner, talented Isis founding member and founder of Hydra Head Records. Sounds like a diverse and attractive billing! And this will also be the opportunity for us to play a few songs from our next album. See you in a few months!”