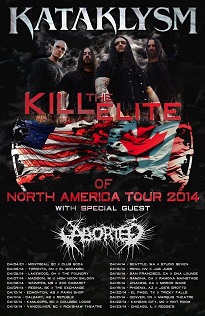 Belgium death/grind outfit ABORTED have been tapped to support KATAKLYSM on their Kill the Elite of North America 2014 tour. The tour kicks off April 4 in Montrel, QUE.

The band’s latest album is Global Flatline, which was was released in January 2012 via Century Media Records. The CD was recorded, mixed, and mastered by the Jacob Hansen (VOLBEAT, PESTILENCE, HATESPHERE) at Hansen Studios in Ribe, Denmark. The artwork was once again created by Justin Osbourn from Slasher Design.