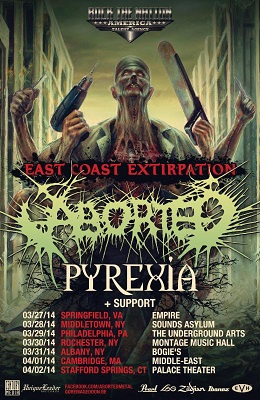 ABORTED have announced headline dates prior to the bands North American tour with Canada’s KATAKLYSM.

The band will play a select number of headline North East dates alongside PYREXIA and other supports.

Mainman Sven had to say the following: “East coast beware, since several of you have demanded east coast shows, we give you some! Also, the reason we are doing this has nothing to do with the fact that we absolutely want to get fat on philly cheese steaks or New York pizza. Also, we are thrilled to have New Yorks legendary PYREXIA coming along with us to give you many shit tsunamis through the power of brutal death metal. in all seriousness, we are very excited to play this week of exclusive headline dates before the release of our new album and we better see some familiar faces there! Grind!”

ABORTED’s new album The Necrotic Manifesto will be released through Century Media in spring 2014.