30TH Anniversary Of SEPULTURA To Be Commemorated With Documentary 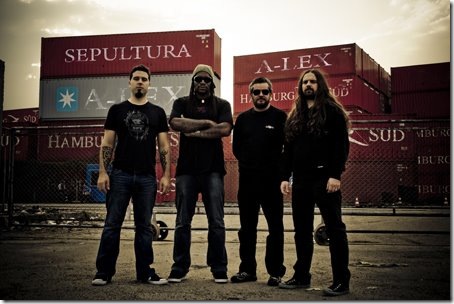 The long awaited documentary about SEPULTURA’s incredible journey from Brazil to the world is certain to bring fans closer to the band they love. Filmmaker Otavio Juliano has been following SEPULTURA during 2010-2013, varied moments of tension and triumph for the band, as they toured and recorded their album, Kairos. Fans can expect nothing to be off-limits. This amazing story will go through SEPULTURA’s history, myths, conflicts, personnel changes and struggles with the Internet economy in the early 2000’s as well interviews and rare footage.

Kickstarter’s press release states about 50% of the film has been shot so far and the following: “We have witnessed this historic band experiencing wrenching transformations and unprecedented growth. We opened SEPULTURA’s vault and dig into the best rare and unseen footage of the last 30 years. We will see them at their most vulnerable and human, and also as idols of the heavy metal genre. Those elements make the overall film an uncommonly powerful statement.”

While this film commemorates thirty years of SEPULTURA, there is also an opportunity for fans to be recognized, featured and thanked. Available at Kickstarter, fans can pledge funds toward the SEPULTURA project, and at different increments receive limited edition DVD, special edition DVD, postcards, autographed posters, books and more.