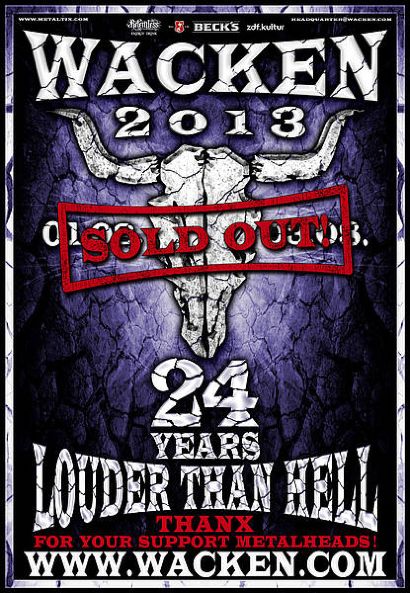 Wacken Open Air media partner NDR.de will stream nine hours of W:O:A material on Friday, September 13th. This streaming will have no region-lock. That means you can watch it from all over the world for free. Further details can be found here.

Next year’s edition of Germany’s legendary Wacken Open Air is officially SOLD OUT for the ninth time in a row. According to organizers: “We never had expected to reach the total sold out in less than 48 hours. All 75,000 tickets are sold. A dozen bands for the billing have been already announced including several special and exclusive shows as well as high-class acts. As every year we have made every effort to provide a terrific billing! And the announcements won´t stop. During the Hamburg Metal Dayz (September 27th to 29th) and our online Advent Calendar in December we will at least confirm one band per day. Together we will turn the 25th Anniversay of Wacken Open Air into a mega party!”