1349: “Massive Cauldron Of Chaos” To Be Released In September

Tried-and-true Norwegian black metallers 1349 will release their new album, Massive Cauldron Of Chaos, on September 29th via Indie Recordings. A new song, “Slaves,” can be streamed below via the YouTube clip.

“It’s more direct and more profound than anything we’ve done before,” says drummer Kjetil-Vidar “Frost” Haraldstad (Satyricon). “The darkness is even more menacing and there are deeper depths. On the other hand, it’s kicking a lot more, because it’s more alive – at least that’s how I experience it.” 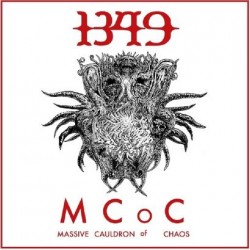