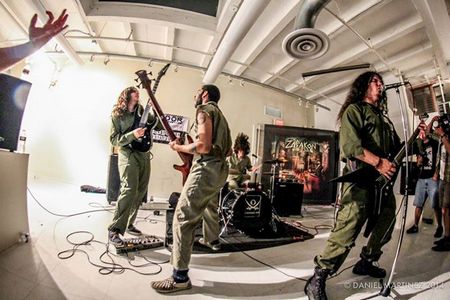 Dead Rhetoric: What can you tell us about the current Puerto Rican heavy metal scene- are you guys able to get a good mix of local and international dates for bands? How often are you guys able to play out there – and what type of reactions do you get from the fans when performing live?

Pagán: The Puerto Rican metal scene is in its strongest form right now in its history. Actually this weekend we had a conference. We had a documentary released last year on the scene that takes the story from the 1980’s all the way to currently, it’s a huge success as the film was shown in Finland, Canada, the United States, Cuba, Dominican Republic. That documentary (The Distorted Island) marked the beginning of what’s going on. This past weekend we had the Heavy Metal Islands, where we had a Dominican and a Cuban band come over here, playing and talking about the way the scenes move over there. All of these things make our scene very strong- we have heavy metal local shows every weekend on Fridays and Saturdays. We have had a lot of international underground bands come over, Behemoth, Dragonforce, Lacuna Coil. There is a lot of movement going on. Puerto Rico is a place to come if you want to make an impact on the scene- people will go to the shows, people will buy merchandise, they will have fun at the shows. 95% of bands that come enjoy their time here.

Dead Rhetoric: You’ll be embarking on your third US tour of dates in mid-December – how do you feel your first two swings went in comparison to your shows domestically?

Pagán: Last year we did a run of the South, and the tour before was on the East Coast. The first tour we had an awesome tour, but it was more of a tryout thing and we had lots of days off in between, two-three days in between sometimes. I don’t consider that a true test, we were pretty much on vacation with our instruments. Last year we did a run where we did every day shows, California all the way to New York. The reaction of the audience was great, the fact that people were asking what things were like for us in Puerto Rico, they were asking if there was metal in Puerto Rico. I think the fact that we come from outside helps us, because they think PR is only about salsa and reggaeton, and don’t know we have a solid heavy metal scene. It’s always great to have good reaction from outside. We love playing in Puerto Rico, the warmth of the people is amazing.

Dead Rhetoric: Being a huge fan of Opeth – to the point that you have their logo tattooed on your body – how have you felt about their distinctive style shifts through the years, especially with their ventures into more progressive rock landscapes over the last two studio records?

Pagán: Opeth is a very interesting group of people. I divide Opeth into three eras- the first era are the first three albums, which is darker and (has a) much rawer thing going on. The second era where they shaped into the thing that Opeth is mostly known for- the progressive death metal thing, as well as the latest more progressive rock era. Opeth is a very smart band, they know what they are doing- especial Mikael Akerfeldt. They are not a band that likes to stay in one place, they evolve and I can respect that. The album I like the least is Morningrise which is their second. What they are doing right now, they aren’t afraid of breaking down boundaries, they are making music for themselves. It’s important to have that as a musician. I heard an interview with Steven Wilson of Porcupine Tree, who is another favorite musician of mine and one of my favorite composers. He said you stop being an artist when you start selling, or approaching music towards what other people want so that you stop being an artist. Opeth sticks to that, they want to keep their artistic side, they don’t use a lot of social media, they like to play music. If it doesn’t sell, it doesn’t sell- they have a good time.

Dead Rhetoric: Who would you say are five bands (or albums) that the band can agree upon as inspirational or influential to the Zafakon outlook on music?

Pagán: That’s a tough question, especially because the other guys are not here to help me answer the question. I will go with bands rather than albums, because for example when you asked about Opeth, Marcus hates the new Opeth. I think Opeth is one of the bands we all like, the other band would be… we have different tastes in music. Revocation would be another one. I would say old school stuff like Metallica, Death the band is a very big influence that we all like. It’s really tough, we are constantly fighting on tour with a playlist because everyone wants to listen to something different.

Dead Rhetoric: Being more into progressive music, do you think bands need to balance out the intricacy with hooks and groove elements?

Pagán: When we started the whole writing process we weren’t conscious of being so progressive. We went with our gut and it went to the proggy side. We aren’t doing anything very technical and to be as progressive as possible, it’s a very smooth thing to happen.

Dead Rhetoric: What concerns you or worries you most about the world that we live in today?

Pagán: In my personal opinion, injustice. You see all these people that do not deserve the way people are being treated. Two hours ago I was watching this video about this Muslim guy who was trying to do a community thing where he lives and most of the people were attacking him because of the whole trouble going on with Isis and the French attacks. That’s very sad- not all of them are that way. Isis is not the same as representing the whole Muslim community. People try to say that all Puerto Ricans are lazy and they don’t like to work, that’s a completely out of context thing. We have people that work a lot to get to where they want to be. So I would say injustice and not have a world that’s balanced in wealth. There are people that need a lot of resources, and people that often have them the most don’t need them. It hurts me to watch these things going on in the world.

Dead Rhetoric: Where would you like to see Zafakon arrive in terms of a career in the next year or two? Who would be some of your dream bands to open for?

Pagán: We would like to have any type of record deal with a good record label, especially like Metal Blade, Prosthetic, Century Media to name a few. Since we are from Puerto Rico, we can do lots of stuff with booking tours and distributing but they have more of a reach. Attacking the labels, and personally as a band we would like to play in Europe. With this tour it will be the third time in the states. As far as bands we would love to play with, my personal interest is in Opeth. We would love to tour with Revocation- they are one of if not the best thrash metal bands going right now. They are increasing in popularity, we admire them and I am really good friends with Brett (Bamberger) their bass player. They are an amazing group of guys, they work a lot.

Dead Rhetoric: As a personal fan, can you tell us about some of the best show(s) you’ve witnessed through the years?

Pagán: Oh man. I saw Opeth this year on their anniversary tour playing Ghost Reveries in its entirety. My top two shows for sure of my whole entire life. I went to the first couple of dates of the New England Metal and Hardcore Festival this year and I saw Between the Buried and Me, and they killed it. I also have seen Steven Wilson in New York. The Red Hot Chili Peppers came to Puerto Rico a couple of years ago and they played an amazing show. System of a Down in New York, and every time I see Opeth they blow me away. Mostly because I’m a fan boy (laughs).

Dead Rhetoric: What are the plans for the next six to twelve months for Zafakon?

Pagán: As soon as we get to the states we are going to record a video, and push the second leg of the promotion with that video. There are some things going on locally in Puerto Rico that I can’t confirm yet. We want to tour Europe as well, we are not going to stay all year in Puerto Rico. It all depends if we can get picked up by a label. Maybe sometime between that we will start writing new material. The video will be a priority, and planning our next tour. 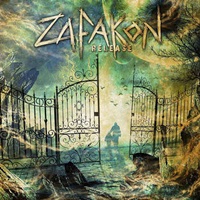