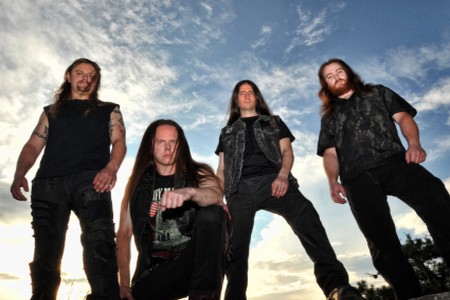 Dead Rhetoric: Overall, how long did it take you to formulate the concepts and layout of everything?

Rice: I came up with a concept idea around 2005-6, and when I storyboarded it, it was going to be primarily focusing around the story of Cain and Abel and then trying to take that to reference that half of our genetic code is of Cain’s lineage. When I storyboarded it, it really didn’t seem to have enough. I set that down, and we ended up writing “Divine Tragedy” and it instantly sparked. As far as the storyboard, it came to me almost instantaneously. I think I came up with that in like a day, as far as putting that there. Once we sat down and started working the music very intently, it took about 6 months to actually write the album – in terms of the music and lyrics. There were songs and riffs that we came up with that totally got shit-canned. There were a few songs that the first go with the lyrics got it to the circular file. It took me two or three times to come up with a good flow of the syllable counts for the lines, all the way down to the vocal approach for the songs. Some of that stuff even changed in the pre-production and actually production when we got to hearing it back and how it sounded. Some vocal styles changed, in some songs, from a thrash or grind approach into death metal, just because it seemed to sit better for the characters in motion at the time.

Dead Rhetoric: The opera-like set up – did you feel it was the best way or was there an inspiration involved in that approach?

Rice: It was one of those things where my whole starting point was just using that flashback as an homage to Paradise Lost. From there, it started developing and I was looking at it in the rhythm that we were coming up with and realized that we were basically in the process of writing an opera. That was very exciting to me because I remember back to seeing some of the concept albums like The Who’s Tommy and Jesus Christ Superstar and things like that. I thought, we are on this track, we might as well make that happen. That’s when we came up with the thoughts on the interlude and it helped with the storyboarding as well.

That’s when it all started coming together and making sense – when we wrote it down and saw that we had three acts with three scenes in each. We needed to make this flow, as far as going into the second act, thinking let’s use an interlude. That’s where “A Priori” came in, as a referencing point of resetting the timeframe to the present in the chronology of the story. Going into the second act with a song like “Sangreale,” where you are slowing bringing people back into the action and letting them relax and digest from the chaos of the first act. It kind of showed us its own way and wrote itself.

Dead Rhetoric: You mentioned this previously, but to elaborate a bit – this is an album that you really should take some listens to get the full picture in your mind. In our hurried and busy society, do you worry that some people won’t give the album the full exposure that it needs?

Rice: That’s absolutely a concern. But at the same time, from what we’ve seen from people that have taken a couple minutes to sit down and read or listen to the whole album have become encapsulated into the story and they are doing what we are asking them to. I have seen where people are like, “man this is a lot to comprehend, I don’t have an hour,” and then you start playing the music for them and the next thing you the whole hour is gone and they don’t realize it. They’re so used to an album coming out and a lot of the songs feeling very similar and feeling repetitious in the style of the music or the presentation of the tunes.

Some albums can become tiresome, and I can understand where they are coming from. But from what we’ve seen, even though that has happened, people that have taken the time to actually listen have enjoyed it and then once they realize how much more there is to the concept and things to wrap their brain around, it’s been told to me that it’s refreshing because it gives people the opportunity to get away from all the busy and all the thought of daily life. It becomes what I was hoping it would be, a reprieve from all that, almost like what you get from going to a movie or an opera.

Dead Rhetoric: I tend to agree with that. There’s so much that comes out and there’s just ten variations on the same thing.

Rice: That’s really what we didn’t want to do. We really wanted to write an album. We totally recognize that we are fighting the ocean in this day and age, with bands like Down that have decided to release EPs because they don’t want to focus so much energy on writing an entire album because it’s going by the wayside. Their art is getting overlooked, where they can release things on a more constant basis and in shorter increments for people to digest. We recognize that, and we are fighting the ocean, but we wanted to write an album, and write an album that people would want the whole thing as opposed to two or three songs.

Dead Rhetoric: I think at least people are more open to that in the heavy metal market compared to like pop where no one really does any of that stuff anymore.

Rice: Absolutely. I don’t think anyone ever did that kind of stuff [in pop]. Even the concepts of yore really didn’t get approached the same way when it came to the radio market and stuff like that. You’d get songs off of these concepts that would make it to the radio, but there was a lot more time in the world at that point for people to go buy the whole album for that [one] song and realize what they had gotten themselves into. Versus now, people want that one song and want it to be over in 3:25 and move on.

Dead Rhetoric: Do you think as you continue along, you will use these larger concepts each time?

Rice: For the next one, we are thinking the same thing. We are going to do another concept. In fact, after we are done here I’m heading over to rehearsal and I have the concept storyboard for the next album. We’ve started writing some of the music and we are going to expand upon the concept of where we are. You can look at Generation of Vipers and how that can tie into Yesterday’s Saints as a band name or a title, and blend them together. If you look at Lucifer, technically he can be considered a saint given his alleged seat in Heaven prior to the Fall. So you have the yesterday’s saints can be tomorrow’s sinners thing, so we are going to try to keep along those lines, in using thin threads of grander concepts to move along into different things that still tie back into that basic foundation.

Dead Rhetoric: Are there any current live plans – what’s the rest of the year look like for you guys?

Rice: We’ve got plans for touring. I’ve been talking to our booking agent and he is in the process of booking like a 10-11 day run for us in March with Iron Man, a band from the local area here who are on Rise Above Records and are represented through Metal Blade here in the US. We have been talking with a couple other folks for maybe another 10-15 day run in May. I’m hoping to get out and do a 30-35 day run in the fall. Maybe do some sporadic things like festivals or other things in the summer and just go with the flow. Next year would be the same, just getting out on the road and get this out to as many folks as we can. 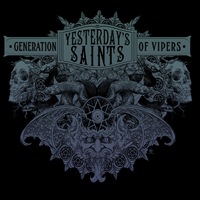