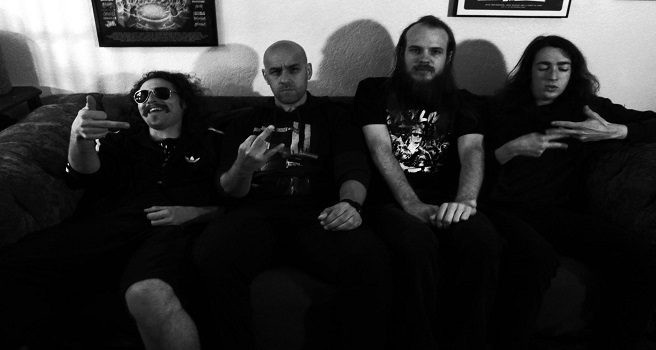 In most cases, the bass is fourth fiddle in the instrumentation scheme. That’s just how it is in metal. The best example would be Jason Newsted’s virtually inaudible tones on …And Justice for All, but as a whole, the bass in metal is meant to back up the guitars, ride along with the drums, and do nothing else. Emerging Seattle death/thrash brigade Xoth see it a little differently, with Ben Bennett’s (ex-Warbringer) bass right, front, and center, holding down a relentless surge of tricky, intricate riffing, and busy drumming. It’s one of the defining characteristics of the band’s debut full-length, Invasion of the Tentacube, which follows their 2014 Hostile Terraforming. Presently unsigned (but not for long), Xoth occupies thinking man’s death/thrash territory like few new bands can, which is why we grabbed the above-mentioned Bennett for some questions. Read on…

Dead Rhetoric: Each of you have been, in one form or the other, successful bands. What ultimately brought the four of you together?

Ben Bennett: One day my boss decided to let me have a day off. I didn’t have too many friends up here in Seattle considering that I had only moved into the city a few months prior. An old friend of mine from Spacewaster (it’s a band) took me to see some cover bands at a venue on Capitol Hill. I remember seeing these dudes slay their guitars and decided to say “Fuck it, it’s time to get back into a band.” I talked to, who turned out to be Tyler [guitar, vocals], and we had some laughs over the Area 51 arcade shooter where a guy is going “GET DOWN!” We talked, I hung out with the rest of the guys, and it just seemed to click. Sometimes luck and what not just get you to where you’re going. If you put yourself out there, you may find what you’re looking for.

Dead Rhetoric: The influence combination you have is rather unique. Not too many bands list Bal-Sagoth and Tangerine Dream in the same sentence. Do you think this adds to the uniqueness of Xoth?

Bennett: Of course it does! I don’t think a single one us only listens to metal. I don’t think we’ve had more than five trips in the van that are just metal listening times. Woody [Adler, guitar, vocals] and I are massive Frank Zappa fans, Jeremy [Salvo, drums] loves his cheesy ’80s stuff/dissonant brutal drum stuff, and Tyler is the biggest synth fan I’ve ever met in my life. We all try to draw outside influence for our playing because (in the great words of ICE-T) “I truly feel sorry for anybody that only listens to one form of music.”

Dead Rhetoric: As for Invasion of the Tentacube, what was the approach in comparison to Hostile Terraforming?

Bennett: We took the tones and set up that we used on Hostile and tried to step it up a notch with Tentacube. We had a limited amount of time on Hostile so it was bones to the grind. On Tentacube we decided to take more of our time to try and get everything perfect. It was difficult to produce all around, considering that we all have vastly different work schedules.

Dead Rhetoric: To these ears, you write technical, but inherently catchy songs, none of which fit into a specific sub-genre Is that a fair assessment?

Bennett: You can pretty much say whatever you want about our music, but in the end it’s just music. When are people going to stop dividing everything and compartmentalizing different art forms? I feel like this creates mass segregation and close-mindedness. Music’s music and that’s that.

Dead Rhetoric: Your bass on the album is simply fantastic. Was it an easy to choice to leave his bass so prominent in the mix?

Bennett: I’m glad you like it! We all have our place in the group. I’m a huge fan of my boy’s Stanley Clarke, Jaco, and Larry Graham. I grew up trying to be a funk-slapper. Since I mixed and mastered the record, it was a no-brainer to give our metal music some balls. Bass guitar is so important in music, and time and time again it gets tossed aside and buried in the mix. I think that most producers are either working with guys that wish they were playing guitar, or they just do not know exactly where to place the bass. They squash it, put some distortion on it, and make it a third guitar on the mix. This is wrong to my ears. When will these people stop giving all the superior drummer kicks the low frequencies?

Dead Rhetoric: What exactly is a “tentacube?”

Bennett: I had originally thought of an oiled-up machine cube that just showed up in the sky and what kind of fear this would stir up in the world. There’s something very disturbing to me about a disgusting oiled-up mechanic cube that’s the size of a nation just sitting in the sky. I figured that it would drive people insane and destroy civilization just due to its existence.

Dead Rhetoric: The album has been well-received by the press and fans (i.e. your Bandcamp page). Does this give you the motivation to take the band further?

Bennett: Of course! We’re a DIY band and that means that we are on the slow grow up and up. The next album is going to be the crucial one.

Dead Rhetoric: Obviously, there is another Xoth from Wilmington, DE. However, it looks like they’ve been inactive for quite some time. Any concerns in sharing a name with them?

Bennett: Not in the slightest. H.P. Lovecraft created the name, not them. Nothing was ever done with it, they have been inactive for a long time and have no releases. Our music fits the theme and actually pertains to cosmic horror. It just happens sometimes, nothing personal.

Bennett: We plan on hitting some international markets, working on our sophomore album, refining our sound, and oiling up the gears to slap, grind, blast, and fuck your ears off at some point or another. Cheers! 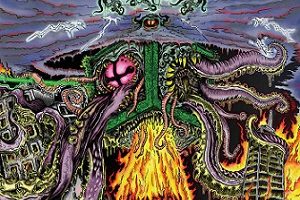