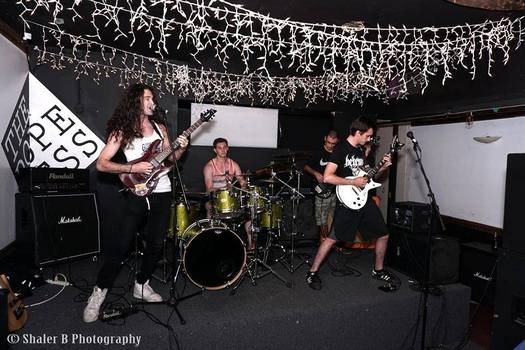 Dead Rhetoric: If you had the chance to pull together a killer 10-12 band festival to play on with Xenophile, who would you ask to play on the bill? It can be any band past or present, doesn’t matter if they are no longer with us…

Pavlik: These are always unfair. My first answer is always Led Zeppelin, though I’m not 100% sure if the sound would fit. I guess the Machine-Head lineup of Deep Purple, Lamb of God, Toxik, Overkill, Exodus, Artillery, Anthrax, Opeth, Mercyful Fate, Symphony X, and I’ll say Revocation as the last band.

Begolli: My dream festival would include us (playing first so we could watch all the other bands), followed by, in no particular order, Lamb of God, Eric Johnson, Cacophony, Queen, Opeth, Rush, Meshuggah, Gojira, Led Zeppelin, Black Sabbath, Judas Priest, and of course, Jimi Hendrix.

Iglesias: Led Zeppelin, Deep Purple, Black Sabbath, Dio, Judas Priest, Iron Maiden, Queen, Overkill, Exodus, Anthrax, Queensryche and The Scorpions just to name a few. That is a very tough question because I would want to play with so many more bands of so many other genres as well other than the classic.

Dead Rhetoric: What are your thoughts on the current metal scene? Who impresses you the most these days, and where would you like to see things improve for the overall health of the scene?

Pavlik: Metal seems like it’s back on the upswing. It settled down for a while but with bands like Gojira starting to peak their way back into the mainstream a little bit, it gives me hope. Most metal shows with a national act that I see are sold out. I see a lot of local bands taking things seriously in the scene, and we’ve watched a couple of bands go from local acts to national acts (Toothgrinder in particular comes to mind). I guess this is where we shout out our local friends, Thrashole, Sycarian (opening at Summer Slaughter in NYC), Anticosm, Condition Critical, so many others, there’s no way we could mention everybody. But I’m starting to see more comradery and less elitism in the scene, which is an incredibly healthy way for the scene to grow, so I’m excited for us and the scene as a whole.

Iglesias: I like the current metal scene a lot. We’ve had the good fortune to play with a lot of great bands from around the tri-state area and many more and I hope they’re here to stay. I love the diversity in it, the different personalities of each bands members and just getting to share in that community experience. I don’t want it to ever go away. Some bands that do impress me these days are far too many to name but the ones that have been sticking around the most and have played with us quite often are definitely some of my favorites. Condition Critical was always a good example to look towards because they had gotten their start when we were first even putting Xenophile together and showed us what a modern thrash band could do and they’re just so brutal. Thrashole are a really unique band as well and they play with so much catchy groove that I can’t help but shake my ass to it. No Gods (formerly known as Panic) are fantastic and great buds of ours and just bring so much energy to their live shows and such cool, fast, thrashy riffs.

Sycarian are some good friends of ours and combine melody and complexity really, really well. Sicada is phenomenal as well in that they write some pretty brutal and techy stuff that is just a joy to listen to. Demopolis from NY has been really impressing me as well as we’ve gotten to play with them a couple times recently. Another band Voidless who we played with recently really impressed me as well. Accelerator from Long Island also really delivers an awesome live show and killer riffs. Donner Party as well is so awesome just delivering killer speed and just great sense of humor. Anticosm as well has been playing again which has been cool to see because I remember growing up and seeing them quite a few times and being really impressed with their black metal/thrash sound. Outside of the immediate Jersey area, I was really impressed with Sonic Pulse from New England and Epicenter as well who we got to play with recently in Rhode Island. Of course I like what Paralysis is doing with bringing that crossover vibe out and Psilocybe as well who combines psychedelia and reggae to their metal really well.

Dead Rhetoric: Outside of the band, what types of activities or hobbies / interests do the band members like to pursue away from music to recharge those creative juices so to speak? And how do you handle the career/family/relationship balance with your band activities?

Pavlik: Ron has soccer, Leart has Kung Fu. I really just go to the gym and watch Game Grumps. I’m fortunate enough to be an Uber driver, so I can make all the money I need on whatever schedule works for me. Since coming back to the band, my absolute number one priority is Xenophile, so a job where I make my own schedule works insanely well.

Iglesias: Outside of the band, I spend most of my time teaching music privately. I was more recently working at New Jersey City University as well as working in catering and doing some roadie work but now I am trying to really focus on teaching guitar, piano, violin and vocals full time. Other than that, I love to play and watch soccer as much as possible and I almost never miss F.C. Barcelona when they’re playing. Over the last year I had also taken on some acting in several musicals such as The Who’s Tommy which few people probably knew. It was definitely new to me and happened almost by surprise but I really fell in love with it, met a lot of great people and who knows, I may do it more in the future if the opportunity arises. Otherwise, I love movies and TV like old school horror films and a lot of sci-fi and historical stuff as well. Occasionally I’ll read but I haven’t sat down to do it in a long while and if I’m not playing electric guitar, I’ll break out the classical guitar and work on some pieces here and there.

I know Leart is very passionate about kung-fu which he has been training in for a little over two years I believe which I am very proud of him for and he even works at his school now. Matt I know drives for Uber which is awesome because it really allows him to make his own schedule and he also spends a lot of time at the gym too. Anthony plays a lot of jazz/fusion gigs in the area when he isn’t playing with us which I think is great too. I’ve been very lucky to have a very supportive family when it comes to music. Since I was a kid, my parents kind of pushed me in that direction when they saw that I showed an early interest and I can’t thank them enough. The “playing in a metal band” choice was probably kind of odd to them at first because they were from a different generation but after they saw how dedicated we all were and had an album to show for our work, I think they opened up to it way more. I’m also very happy with the relationships I maintain with other bands and all the friends I’ve had over the years and the new ones I’ve made as well and being in a band/bands really doesn’t impede that especially when you’re basically best friends with your band mates.

Dead Rhetoric: What worries/fears do you have about the world that we live in today? Where do you think people need to put more energy into to make this world a better place for all?

Pavlik: Without getting overly political, I think it’s fair to say that we’re concerned about xenophobia and senseless fear-mongering. Our name means one who loves and appreciates foreign cultures and ideas, so naturally we hate to see suspicion/fear/hatred of other people. Without sounding too cheesy, I really think it’s a matter of actively exploring and celebrating our differences, not pretending they don’t exist, and not using them as a means for hatred and exclusion.

Dead Rhetoric: What are five albums that everyone can agree on as very inspiring/influential to push Xenophile creatively? They can be metal or otherwise…

Pavlik: I don’t know what everyone else says, but here are mine: Focus by Cynic, Think This by Toxik, Rust in Peace by Megadeth, Exhibit A by Exodus, and Among the Living by Anthrax.

Iglesias: Five albums that I think were pretty influential on Xenophile are: Rust in Peace by Megadeth, Among the Living by Anthrax, Exhibit A by Exodus, Focus by Cynic and Horrorscope by Overkill but there are so many others that I would love to name up here i.e. Think This by Toxik, Energetic Disassembly by Watchtower or even Go Off! by Cacophony.

Dead Rhetoric: What’s the game plan for Xenophile over the next six to twelve months: more touring, more recording, more promotion? Are you content to remain a self-financed act or are you seeking out possibly means to push up to a record label- and if so what types of things are you looking for from a label?

Pavlik: We’re not necessarily looking for label support, we know that can end up putting a band in financial stress. I guess if the right deal came along, mainly involving a lot of touring, we’d be interested. Until then, it’s DIY. We have a short Midwest run coming up in November, are looking to do an east coast run in the spring then a national tour by the end of next year. We just started recording the first of a few singles that we’ll release sporadically until we can get our next full-length out, hopefully in time for the full tour. Maybe if we do get signed we could enter a real album-tour-writing cycle, but we’ll just keep playing and writing and recording gearing up for our tours for now. The end goal is to keep doing this forever and make a living off of it, so however long it takes, by any means necessary, we will continue until we drop. 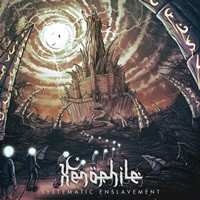