Xasthur – The Bleakness of Reality 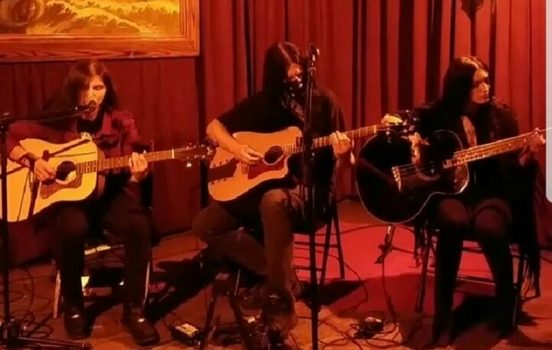 For much of the 2000s, Xasthur was a very prolific one-man depressive black metal act from Malefic (real name: Scott Conner). But in 2010, he decided to end the band in its current form, and announced an acoustic/dark folk project by the name of Nocturnal Poisoning. Given the drastic change in musical operation, as well as the band name change, he eventually went back to the name Xasthur, thought it would be continuing the dark folk he began at the turn of the decade. The switch to acoustic also meant he was going to go from being a one-man band to a three-piece, to round out the folk feel. Most recently, the band signed to Prophecy Productions and went on tour with Six Organs of Admittance and Wino. We talked with Conner about the changes to Xasthur, going acoustic, and whether he’d ever be willing to go back into more metallic territory.

Dead Rhetoric: You just finished up a US tour. How did it go overall?

Scott Conner: It went pretty well. I think it was the first time where everybody got along really well, like everybody. It’s important, and something I hope for every time. Sometimes it doesn’t go that way, but this time it did. Everybody had a really great time and had a lot of respect for each other. Everyone enjoyed what the others were doing a lot. Some of us even sat in and guested on each other’s sets for certain songs and things like that.

Dead Rhetoric: I know this is several years removed at this point, but what caused you to move away from black metal and into acoustic venues? I believe the term was ‘doom-grass.’

Conner: It was many things. A long story, but I’ll try to make it shorter. With the black metal thing, I found it kind of limiting. I couldn’t do very much with that kind of music anymore. Staying in one genre has its limits, as opposed to playing whatever sounds good to you. I realized having 3 picks on my hand instead of one helped a lot, and using all 6 strings. Using up to 18 frets helped a lot. I just had more to work with changing to acoustic. I realized that I wasn’t going to run out of ideas, and I still haven’t. Things like that made me go for it.

Sometimes I give the example of playing a piano that has only black keys, or it only has white keys. You are going to run out of ideas. But if you have one that has both, and you use all of them, you have more possibilities. You don’t get stuck and do one kind of music, fewer chords per song. You don’t have that problem anymore.

Dead Rhetoric: Have you found that fans have been responsive to that change?

Conner: It’s been a few years since the change happened, but I think in the beginning, people were open-minded and tried to give it a chance, which was appreciated. After a while, some people were disappointed that it wasn’t black metal, but there are many more black metal bands out there to choose from. These days, I think a lot of people are more informed. They know what they are getting, and they are showing up anyway. That’s what happened on this tour. It took a number of years to get it through to people that the music has changed a lot, and they are finally know it, and they are showing up. That means a lot to me.

Dead Rhetoric: You’ve weeded out some, and probably drew some more in based on the change now.

Conner: Right. I believe there’s something in it, no matter what type of music you listen to. There’s enough chord changes, there’s enough riffs, there’s enough picking and complexity in it for black metal people too. That’s really what it’s all about.

Dead Rhetoric: When you first started this re-invention so to speak, you took up the name Nocturnal Poisoning. What brought you back to Xasthur?

Conner: The name, Nocturnal Poisoning, people didn’t know what it was. The music changing was already a huge change, the name changing too also made it fall off the radar even more. It’s crazy enough to change the music, and even more crazy to change the name too. I realized there needed to be some sort of familiarity to people if they are going to listen/catch on to it. I never should have changed the name, so I changed it back to Xasthur.

Dead Rhetoric: Do you feel you ended up losing fans because of that?

Dead Rhetoric: What different elements do you feel that the acoustic approach allows you to hone in on?

Conner: I kind of set up a lot of changes in a song, by mixing new chords that I have learned and invented. I set up the darker ones with those. I can’t set up dark with dark very well, and I don’t think I’m the only one that has that problem. There’s more ups and downs to it. From chord to chord, from one riff to the next, there’s more variation to it now. It’s more complete. There’s more riffs per song. The picking is better and faster. I’m able to put a lot of parts together – the strength is putting parts that don’t go together and then making them go together anyway. That makes it kind of strange. I don’t want to make anything normal. I know that I’m breaking acoustic stereotypes, and that’s what I’m all about, both musically and lyrically.

Dead Rhetoric: Even in acoustic form, there’s a darkness to the music. How would you describe it?

Conner: I think it’s dark in reality. It’s all based on reality. I think that’s what makes it dark, along with the sound of it. The subject matter is more based in reality, and reality can be darker than fiction. That’s what it’s all about. A lot of the themes – there are a few reoccurring ones like poverty, homelessness from some else’s point of view. I write about liars a lot for some reason. I write about hyper-inflation. Things that are really going on, and I write stories about things that I’ve been through in my life. I’m just trying to tell the truth about what I have seen and whether it’s in my life or the life outside the window. I’m kind of looking out the window and I’m walking down the street and I’m writing about it. What’s really there underneath it all, what’s underneath people and their minds. That has a lot to do with it.

Dead Rhetoric: That’s got to be refreshing too, to get away from the normal metal and black metal take, which is usually more fantasy-driven.

Conner: I think it is. It’s fantasy and I know how to write about the hell that I’m actually in, rather than the coloring book yellow and orange and red fictional hell flames. I don’t know how to write fantasy stuff. I would have been a comic book writer or something instead.

Dead Rhetoric: For me personally, there’s that association with an acoustic guitar of something that’s genuine and honest.

Conner: Yeah, if you are playing blues, soul, bluegrass – you can’t really do that and sing about the weather and capes/swords/castles. Anyone can do what they want, and they will, but it gives you a chance to tell a different story than what we have heard already in different types of music.

Dead Rhetoric: You were a one-man act, and there are now three of you. How has the songwriting and approach changed, outside of genre of course?

Conner: Playing with other people has changed things a lot. That’s been the big change. It’s forced me into being a better musician, but some things haven’t changed. I still write everything. They learn everything and they are really good at that. I can’t turn myself into three people. I’m not a singer either. I do everything I can to make up for that and compensate. One of them is a singer, and he fits the words into the songs really well. I always let him handle that. I let him go with whatever comes naturally. Whatever lyrics I give him, he fits them in great.

Dead Rhetoric: What made Prophecy Productions a logical choice for releasing new music?

Conner: They just contacted me one day, out of the blue. I didn’t expect it. They seemed very serious, and sounded like they could be the help that the band has needed for a long time. They seemed like a solution and I was impressed with what they wanted to do. When they called me up, I said yes, let’s do this.

Dead Rhetoric: Now that you’ve removed yourself from it, what are your thoughts on black metal at this point?

Conner: I think it’s really run its course. But I think the fans and musicians are invested in it anyway, so they stick with it. I can kind of understand it. But it depends on what you are invested in. I’ve been out of the loop with it. I used to know all the bands and what they were doing with it. Today I find out about it by accident.

Dead Rhetoric: Would you ever consider coming back into heavier music, or do you feel it’s best left in the past?

Conner: I don’t know how it could be worth it for me at this point. I’m past the point of no return. I’ve gone so far away from it that it would be harder to go back than to go ahead. It’s just something I would do, maybe, if I had the time to focus on it. I would need the place and the time. But I don’t write that kind of music anymore, and don’t really care to. I feel like it would be really compromising to go back and do it again. Today, there’s no compromising at all. I’m not trying to rebel by doing what I’m doing, but I don’t want to sell out either. I want to do what I’m better at doing.

Dead Rhetoric: I realized I probably said the wrong word when I said ‘heavy.’ Does this music feel like a different form of heavy in terms of the way that it presents itself to you?

Conner: I think so. When we were touring recently, a few different times Wino said that this was heavy. If he says its heavy, then it’s heavy [laughs]. I think he would know. It doesn’t always have to be drums and distortion to be heavy.

Dead Rhetoric: What are your plans for the band moving forward?

Conner: I want to keep on touring until the music and the lyrics get through to people. Then I want to keep doing it too. I’ve already recorded many times, and it’s not the same as playing live, and how it’s done live. That’s pretty much what I want to keep doing. We have to record an album soon, which will come out next year on Prophecy. I’m looking forward to that too. We are going to a studio, and it will be my first time. I’ve always recorded at home, so I’m looking forward to it. It has to go up a notch. It’s going to be better because of that. I want to keep touring as much as I can though, and get the lyrics and music across to people, whether they relate to it or not, or whether they choose to relate to it or not. As long as it gets through to people. I just want to keep doing what I am doing all the time, but on multiple levels, rather than being someone at home recording. I want to go further than that.