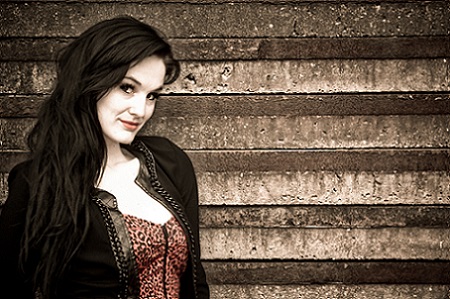 Dead Rhetoric: You’ll be touring North America in the fall supporting Sonata Arctica along with an appearance at the Progpower USA festival last year. What expectations do you have and what can you tell us about Xandria in terms of a live entity and overall show atmosphere?

van Giersbergen: For me the most important thing is to have fun on stage. I don’t think you should fake enjoying your time on stage. I get these comments when I come off stage from fans that I really enjoy being on stage and it makes them happy and kicks up their adrenaline even more. I will make strange faces with the band, give the band members a hug – you need that friendship within a band and that should be portrayed as well on stage. About coming to the USA again – I am really looking forward to it. I wasn’t in the band at the time Xandria played ProgPower, but I did play with them on the 70,000 Tons of Metal cruise. I loved eating pancakes for breakfast – I could do that all day! I have to watch my weight of course because no one wants to see me double in size!

Dead Rhetoric: Are there any early Xandria songs from the more gothic oriented first four albums that you’d love to pull out in live sets down the line beyond what you currently delve into? Say reaching back into Kill the Sun for the Wildhoney /Tiamat oriented “Ginger” for instance…

van Giersbergen: I would like to do that. The band is moving forward and I know they want to portray themselves within the new style, like a Xandria 2.0, but I enjoy singing the older songs too. I have a different approach to the older material – it’s more of a straightforward way of singing, a relaxing way of singing in comparison to the new material.

Dead Rhetoric: You’ve performed on the 70000 Tons of Metal cruise recently. What’s your take on this latest phenomenon? Could you have ever envisioned the marriage of metal and travel like this working so well?

van Giersbergen: This was a wish of mine to do that. I went on their website when I joined the band to see what shows were coming up and they already had this booked, so I was thankful I got to do this show. Kind of a dream come true there; I am really an extrovert so I had the time of my life. Some of the other guys in the band are introverts, but I talked with as many people on board as I could. I introduced people to the band, talk to people as people- this comes very handy in my front woman role. It’s really like a holiday, and oh yeah – I get to play a show too!

Dead Rhetoric: Where do you view the state of symphonic metal in 2014? Are there areas that need to be looked upon/ worked upon to improve everything to keep the scene healthy and thriving?

van Giersbergen: The key is to be true to yourself. True to yourself can also mean making a style of music that is more common or more like someone else. We are often compared to the old Nightwish sound, and I know as a composer Marco is a really big fan of Nightwish. We aren’t really trying to copy them, but the magic that happened in that sound is the magic that he feels when composing our material. Music is about emotions at first, it shouldn’t be too much about being commercial because it loses the purism. I don’t believe in people who try to sell a product which they don’t fully support or their heart isn’t it.

Dead Rhetoric: Have the numerous lineup changes stalled the forward progress Xandria attempts to make through the years?

van Giersbergen: Yes, you have a good point there. But then I see that there are a lot of people that are still devoted to Xandria, and then I am truly amazed at the power and dedication that the band themselves have along with the fans. Who knows what could have happened if Manuela [Kraller] had stayed with the band. We take everything day by day, the reviews that we have our very positive and people are very accepting of me as the new singer. I have complete faith in the future.

Dead Rhetoric: Name three albums that have made the biggest impression on your life?

van Giersbergen: Ah, I really hate this question! [laughs] This is so damn hard! I think Wishmaster of course from Nightwish should be in there. The biggest impression I would have to go out of the metal area and say Bat out of Hell from Meatloaf, which of course was composed by Jim Steinman. I am much more into artists than a particular album by themselves. This may come as a surprise, but one of the first albums from a violinist named Vanessa Mae, she is from China or Korea which made me play the violin five years after that- but I wasn’t that good. This album got me to play an instrument, next to singing, and this was when I was very young.

Dead Rhetoric: Now you also make a living as a vocal coach. What are some of the biggest areas you see your students struggling with?

van Giersbergen: I think the biggest issue at this time is those idiot shows on television – I am sure you have them in America like America’s Next Superstar or The Voice, American Idol. I really hate those shows, I never watch them; I find this ridiculous. It’s about destroying dreams and the only one benefiting from this is the producer. In the end, if you get in the top 10 you get sort of famous because of that it will only last for one or two years, and then you are branded with this stamp of becoming famous through a show like this and no one in the real music business will take you seriously anymore.

Dave Grohl (Foo Fighters) made a big statement about this- not putting in your hours of work, the blood, sweat and tears, [you] didn’t get there by total devotion. You don’t gain the rewards through the hard work. With my students I see their goals as mimicking someone else and entering a competition like that. We have lost our goal here; within a half year I have to get these people back to basics with their own voice. If you find your own voice there is so much more to that, you can color in different ways, the soft elements can be expressed better. Why should you be someone else instead of being who you naturally are? If you value what you have you become happy with what you achieve. If you aren’t only achieving goals without being happy about the result, then you will never be truly happy.

van Giersbergen: We will start touring in May in Europe. After that the festival season kicks in with more announcements coming up. Then in the fall we are coming to North America. There are other plans in the works, but I can’t tell you just yet.