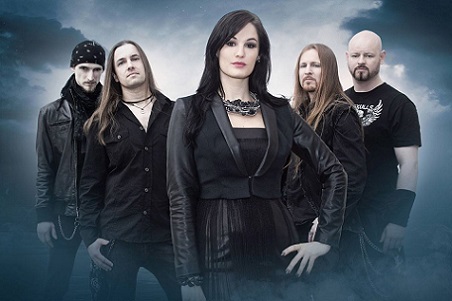 We all know the major artist in the symphonic/gothic metal genre that propelled the movement to larger than life heights of popularity is Nightwish. Since then, other bands from other countries have taken the template and claw their way up the ranks. Germany’s Xandria started in 1997, and their original Gothic strains had more in common with Tiamat than their current symphonic ways. Through numerous lineup changes and albums, the quintet developed their own sound: multi-faceted and seeking to establish themselves through a series of European touring and festival excursions.

Their sixth album Sacrificium is probably their best to date, containing the latest additions to the band in bassist Steven Wussow and vocalist Dianne van Giersbergen, a Dutch vocalist with seasoning and training in the opera tradition (and not related to ex-The Gathering vocalist Anneke). Ready to embark on an extensive North American fall tour with Sonata Arctica and Delain, I spoke with Dianne one early Friday morning (3 a.m. my time), and I found our conversation to be very humorous as she hopes to bring Xandria’s style to bigger audiences…

Dead Rhetoric: How does a Dutch soprano vocalist such as yourself attract the interest of a German symphonic/gothic metal act like Xandria? Was it through your work in Ex Libris or live performances for Pathfinder? Or another method of contact, and had you been familiar with their discography?

Dianne van Giersbergen: Well, it had to do with two particular people there. A producer who knew my work in Ex Libris introduced me to the band on paper. Xandria was always a favorite of mine, so now I get to sing all of this material live!

Dead Rhetoric: The new album is Sacrificium, and the band waste no time in airing all elements of your sound with the 10 minute-plus title track as an opener. Is that a risky venture- especially in attracting newcomers who may not be patient to sit through such a long, expansive arrangement right from the start?

van Giersbergen: That’s a good question. I can honestly say that we have been debating this within the band whether it was a good choice to make. I had my doubts but I think it really works, it really shows what you can expect for the rest of the CD. Of course there are people who are really impatient but you have a skip option on your CD player and could go to the next song which is a bit shorter.

Dead Rhetoric: Which songs on the new album pulled something out of you in terms of emotion, melody, or ability that even surprised yourself?

van Giersbergen: All of the songs… I studied all of them before I went into the studio so I knew what to expect and expect from my voice. The only song that really surprised me was “Sweet Atonement,” which was recorded in one take and struck me how emotional I became singing this song. I wrote the lyrics and it’s based on a true story, a love story that didn’t come true and had a very tragic ending. Living this song for the first time on record it caught me off guard, this song gives me the chills and the band is also moved by the performance.

Dead Rhetoric: I heard that you recorded the vocals in nine days, is this correct?

van Giersbergen: Yes, this was a real vocal marathon. I have to do a proper warm up, because every day when I wake up I sound like I have an alto voice. I end up greeting the guys in their own vocal register – “Good morning, guys!” [laughs]. The more tired I get, the lower my voice sounds in the morning, because the muscle tissue has to be stretched in the warm up. I started singing when I was four-years old, so I’ve had 24 years now in singing. I know my voice pretty well and I know when to just say I need to give it a rest. After that the full register is there.

Dead Rhetoric: A balance has to be made in terms of aligning keyboard orchestration and natural aggressive guitar riffing for symphonic metal to succeed in my opinion. Would this be an ongoing discussion as the material takes shape from composition to recording stages- when to go full bore bombast and when things need to be a little more stripped down and natural?

van Giersbergen: There could be a discussion, but for this album when I joined them the compositions were pretty much done, at least 98% I think. We changed a little bit of the vocal lines to match the color of my voice better, but overall compositions and what you just described, Marco (Heubaum- guitarist/ keyboardist) has a very good instinct for writing. He knows over the years what works and what doesn’t work – he always has the vocal as the top layer and the space for the music to blossom. He has managed that in a very good way.

Dead Rhetoric: How do you view your relationship with Napalm Records at this point? It seems like they have a strong roster of groups in this sub-genre of metal, gaining ground not only in Europe but also North America, South America, and parts of Asia.

van Giersbergen: For me this is the first time I am really dealing with the label, I have learned how the business works and it’s very difficult for me to describe this relationship because being so new to the band I am just getting used to what is being expected of me, the tasks that are run by the label. As a band you don’t have to do everything yourself, and I am really used to wanting to do everything myself and have control, which can be difficult to hand over and trust other people. Napalm is really happy with us so I would say things are very positive.

Dead Rhetoric: On your personal bio from the official Xandria website, you mention that sometimes being a bit too straightforward is a bad characteristic. Can you name an instance or two where this has happened in your music or personal life?

van Giersbergen: I think it’s a habit that people describe of me – something that I don’t tend to notice. I can be really honest and straightforward, males are way more honest and straightforward than women. Women tend to be chatty but will be honest to people behind each other’s backs. I am way more like if I feel something is wrong I will come clean and be honest about it to their faces. Sometimes I will use the wrong words at the wrong time – for instance entering a room where everyone is very quiet and solemn and I will say something like “Who died here?” – and it was an instance where unfortunately someone had gotten the news that a friend of theirs had died. I said it without even thinking first.