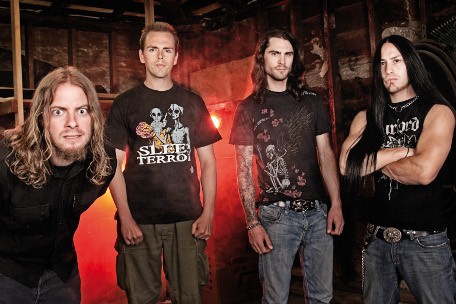 Deron Miller doesn’t like to mince words, which is refreshing. Too often Blistering interviews folks of the metal variety too worried about tripping over their own statements in order to not offend anyone or stir up some “beef.” It’s a tad annoying when one is on the prowl for quotables, but Miller wasn’t about to hold back, even though he’s a relative newcomer to the underground metal scene. Targets for this conversation included Morbid Angel, Queensryche, Everytime I Die, As I Lay Dying, Black Dahlia Murder, Trivium, and Metallica. Not exactly small-time bands.

Still better known for his work with hard rockers CKY, Miller’s World Under Blood project finally saw the light of day this summer, releasing the excellent Tactical via Nuclear Blast. Miller has certainly done his homework, for there’s not a trace of trendiness to be found here. Instead Tactical is a searing, explosive album with shards of melody to go along with technical riffing and drummer Tim Yeung’s (Morbid Angel, Divine Heresy, etc.) stellar time-keeping. It’s one of the year’s more surprising albums…probably because a guy from CKY was behind it, believe or not.

Here’s what the very friendly (and talkative) Miller had to say to Blistering. It’s quite a bit, so strap in…

Blistering.com: You announced this project several years ago, so how does it feel to have Tactical come out?

Deron Miller: It was a relief, but I just did an interview where it dawned on me that it didn’t take four years for the record to come out, I announced the band four years ago. That was a mistake. My problem was that I got all excited and I jumped the gun and said this was going to be happening, but I did it too early. I technically didn’t sign a record deal until late 2008. Pretty much, people waited two years for it.

Blistering.com: If you look at it this way, then you gave people a few years to get excited about the record.

Miller: Best Buy was carrying everything. It was still a good thing. I’ll never forget the day my brother came home from work – he worked at Tower – and said he got fired, everything was closed. I was like, “What? This is the beginning of the end.”

Blistering.com: It’s still weird knowing that there’s this whole generation of people who think they don’t have to pay for music.

Miller: Right. I’m not bitter about the fact that people won’t buy my records. I’m concerned about the future and these kids that have a sense of entitlement that they can get their entertainment for free. Everything they do is for free, except their cell phone bill, which their parents pay for. I’d say the majority of today’s teenage population has no real future because they blow off school. Pretty much all they do is fuck, spill beer, and stand out in the front of the movie theater instead of going in.

Blistering.com: I think it’s all in how you were raised. My parents were old-school.

Miller: We’re lucky. Anyone 30 and over, I think we were the last generation to get a good sense of responsibility. That’s what saddens me. Sometimes I get emails from fans saying, “When are you going to put out music so I can download it for free?” And they’re not kidding.

Blistering.com: I’m sure that not only affects World Under Blood, but CKY.

Miller: Every hard rock and metal band has pretty much…99% of those bands has lost 90% of their audience, at least as physical product is concerned.

Blistering.com: I don’t know how you combat it. Nuclear Blast does package deals with a t-shirt and a CD.

Miller: Those did really well. It ended up messing up our first week Soundscan. They couldn’t send out the packages quick enough, so anything that didn’t get sent out didn’t count as being scanned. The first week was actually 1,300 [units]. We only got credited for 900, so who gives a shit? Thirteen-hundred isn’t good. Ten-thousand isn’t good! CKY used to come out and sell 27,000 and be #35. You sell 27,000 now and you’re huge. And you’re record is gone the next week.

Blistering.com: In relation to CKY, World Under Blood has to be more fun because there’s less pressure, right?

Miller: I think that saying World Under Blood is a more relaxed and fun thing to do could cause it to be a bigger thing that CKY. CKY is 15 years old, we did what we did. Whether or not we’re going to continue with it is up in the air. Nobody can agree on the way to go or what the next step is, so unless we can come to some kind of agreement as to what to do next, I think it’s going on hiatus. World Under Blood is a new thing and something I’m more secure about doing. I consider myself a death metal expert, which is interesting because I don’t like most death metal. But what is good about death metal in my opinion, is what makes me love it so much. I think the less pressure I have being in World Under Blood is going to make it look more interesting. I think it’s going to show we’re having more fun with it.

Blistering.com: I think it’s important at this stage to have fun with something like this.

Miller: Well, even World Under Blood isn’t without its problems. I have to replace a couple of band members for touring purposes.

Blistering.com: That’s what I was going to ask since Tim is tied up with Morbid Angel. Do you have someone in mind to do drums?

Miller: I don’t think it’s going to be that difficult. What the label is asking me to do is fire the entire lineup. I said I don’t think that’s the best idea. They wanted me to find people that are within five miles where I live so I can rehearse. Risha [Eryavac, bass], as much I love for him to be in the band, he’s four hours away and has to get here on motorcycle. That’s expensive. Plus he has a kid and he has a job and it’s not something that seems feasible and I don’t want him to have to suffer through that if there’s no reward. [Eryavac has since been replaced by ex-In this Moment bassist Kyle Konkiel – ed.]

I’m going to get some guys that are closer to me that make rehearsal a hell of a lot easier. I’m going to keep Luke [Jaeger] on guitar. I have him at my house for weeks at a time, so it’s probably going to be me and Luke, and two new guys. Tim doesn’t even seem to be happy in Morbid Angel, so I doubt he’ll be happy here.

Blistering.com: Yeah, I was wondering if you had some insight there. It’s kind of an “interesting” record [Illud Divinum Insanus]. Have you heard it at all?

Miller: I bought the record first because I wanted to hear what Tim did. I listened to it, then I turned it off. I didn’t get too far into it; it didn’t seem to be going anywhere for me. That’s just my take on it. I was never a big Morbid Angel fan to begin with because they seemed like they were capable of doing something like that. They always put too much artistic ideas in that don’t always work. I don’t think it worked at all. I know some inside stuff about the band and it’s not my place to share, but Tim’s plans are to come home from the Morbid Angel tour and pack his drum kit up for good. He’s just as disappointed and frustrated about the business as I am, but I’m not one to give up. He’s really negative and not the same person I jammed this record out with.

Blistering.com: I wonder if the negative backlash got to him. The record is this generation’s Cold Lake. [Celtic Frost’s infamous glam rock album from 1988 – ed.]

Miller: He’s not a permanent member of the band. I guess Pete Sandoval is expected to return, but Tim told me he’s probably not going to return. Trey [Azagthoth] doesn’t like the album…there’s a lot of weird shit going on, so I’m sure he’s suffering on that end. I don’t blame him. I’m not one to call him up and say, “Come home and play with my band!” Obviously, he’s going to make a lot more money playing with Morbid Angel. It’s pretty much all about the money with him. One of the things that really bummed me out, is that me and Tim get along really well and are good friends, so he called me after the first Morbid Angel tour and wasn’t happy and took it out on me. I asked him if had some time to sign posters for the pre-order of the album and he basically told me he wanted the label to pay him to sign the posters. That’s really bizarre.

Miller: I know. It’s like, “Are you in this band or did I hire you to be in this band? Do you want a nickel per poster?” I don’t understand. I haven’t talked to him in awhile. I’m just going to forge ahead and find another drummer…whatever.

Blistering.com: Given your geographic locale, I’m sure you can find someone.

Miller: There’s no lack of ability, it’s just hard to find reasons to continue with music [laughs]. That’s about it. I read that Phil [Labonte] from All That Remains has yet to make six-figures in this business. I don’t understand that at all. That’s outrageous!

Blistering.com: And they play in front of packed houses all the time.

Miller: I know. CKY in our heyday, we were taking home some sick-ass pay. To read that, that’s he’s never made six-figures in his band is absurd. Someone is stealing his money.